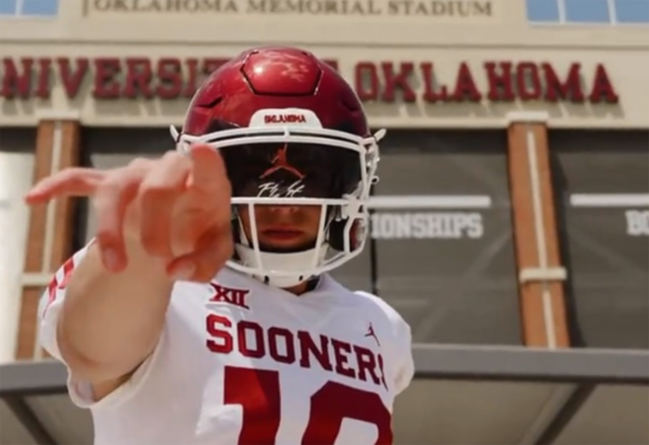 General Booty has the best name in college football but he is ‘More Than Just a Name.’ He alludes to that notion in his newly-launched website for NIL merchandise that also gives back to an incredible cause.

Earlier this week, Booty launched his website MTJN.org. There, you can find his awesome men’s and women’s clothing, accessories, news and events, and his contact information.

All of the shirts are incredible. One reads ‘General Booty reporting for duty!’, another reads ‘Booty Call’, and they all vary in how upfront they are that the Booty that they are referring to is a quarterback at Oklahoma. It’s fantastic.

However, what makes it all even better is two-fold. First and foremost, General Booty is able to make money legally as a collegiate athlete. That was not the case just 18 months ago— we would have been deprived of General Booty merch without NIL.

Secondly, Booty is using the profits to give back. 20% of the profits will be donated to the Oklahoma Children’s Hospital at OU Health. That is where the ‘More Than Just a Name’ comes into play.

Here is what Booty says about his mission on the website:

Ever since I was a young kid playing quarterback, my name has grabbed a lot of attention. I’ve always tried my best on the field and off to give people a reason to remember my name. Based on the recent court’s ruling allowing Name, Image, and Likeness (NIL) deals, I wanted to use my name to support a great cause. Saying that, I am proud to announce my partnership with Oklahoma Children’s Hospital OU Health.

“More Than Just a Name” was created to help children and their families who are going through some of the most difficult times in their lives. I’m excited to announce that 20% of the profits for any online orders will go directly to Oklahoma Children’s Hospital! After your purchase please continue to check back with us on how we’re making a positive impact together!

How can you not love this? Not only is Booty’s name the best in college football, but his merchandise is everything that you could ask for and more, and he is using his name and his platform to do good in the world.

This right here is what NIL is all about. Good for you, General Booty.