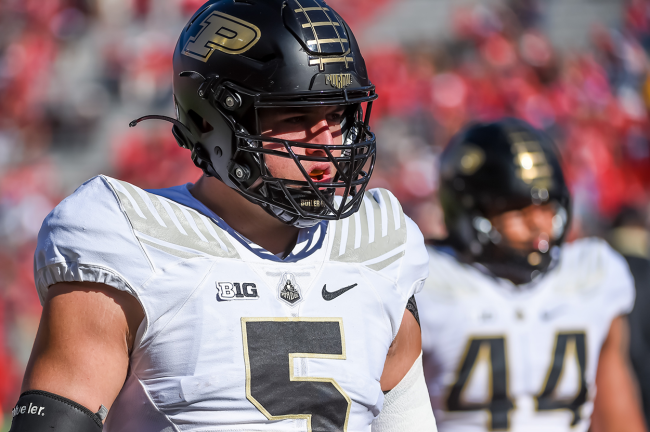 Purdue defensive end George Karlaftis may be drafted as high as the first round of the NFL Draft later this week. He stands 6-foot-4, 263 pounds and is set to make an NFL franchise very happy.

Although his numbers with the Boilermakers don’t jump off of the page, his intangibles make him a very developable prospect that has been rising up draft boards. Despite his large frame, Karlaftis ran a freakishly fast 4.71-second 40-yard dash — while shirtless in sub-freezing temperatures.

As the 21-year-old continues to gear up for the next level, his on-field performance is fueled by a wild Chipotle order. Where most people would get a bowl with rice, a protein and some vegetables, maybe some salsa, perhaps some guacamole, or even some corn, that is not the case for Karlaftis.

George Karlaftis does not mess around and get fancy at Chipotle.

The big pass-rusher gets the following “bowl” order, which is truly insane:

That’s it. Literally just the two scoops of rice, three scoops of protein and cheese.

Getting draft-ready with the help of @ChipotleTweets. Take a look at my Unwrapped episode #chipotlepartner pic.twitter.com/YJUoEZAZtD

It is unclear if Karlaftis is simply a picky eater, or if he branches out beyond rice, steak and cheese. Either way, if you’re an NFL franchise and you’re looking into the Purdue defensive end, there are two ways to view his order:

Either way, Karlaftis is dominating on the field and his rice and steak seem to be fueling him just fine. Pyscho tendencies are actually a good thing when it comes to a defensive end.