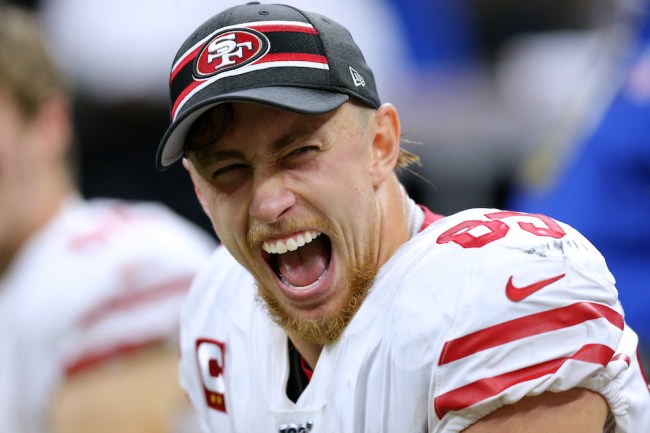 I have a soft spot in my heart for George Kittle. Two years ago, he was my sleeper pick in fantasy – and exploded – leading my team to a second-place finish and a ton of money.

Last year, I picked Kittle in the early rounds, and my team walked into the playoffs. I ended up in fourth place and we’ll all just shut the fuck up about that fact.

Kittle, when healthy, delivers every damn week but the man can not deliver with the soft vocals. This clip from last season is proof positive.

On the latest episode of “Brick by Brick” — the 49ers’ own version of “Hard Knocks” —  was mic’d up during practice when Avril Lavigne’s Sk8er Boi came on over the stadium loudspeakers.

Kittle couldn’t help but sing to “his song” and the man absolutely murdered the act of singing.

He was a sk8er boi she said watch @gkittle46 mic'd up later boi.

Kittle is a beast on the field and worth every penny of his new contract but he ain’t going to fool anyone should he ever appear on the “Masked Singer.”

“Oh, you sound like a groundhog being murdered with a Bic pen. Are you George Kittle?”

My favorite part of this video is how genuinely excited Kittle looks when “Sk8er Boi” comes on and how teammate Fred Warner looks like he gives literally zero fucks.

I love #85 but I’m sure there’s a point where everyone he comes in contact with eventually looks for his OFF switch.

Cody Rhodes Discusses The 2 Biggest Influences Behind His Neck Tattoo