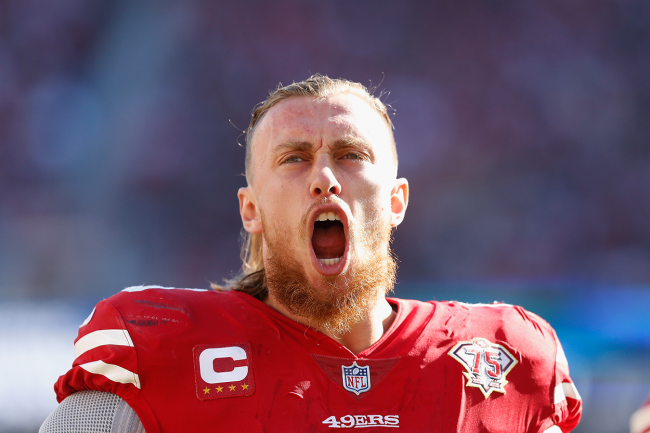 George Kittle is either the best or the second-best tight end in the NFL, depending on who you ask. The 28-year-old, former fifth-round pick out of Iowa has blossomed into a superstar with the 49ers and plays a crucial role in the San Francisco offense.

When Kittle is on the field, there is a significantly higher probability that his team will score. As a result, he has been named a First-Team All-Pro and reached three Pro Bowls.

The thing with Kittle, unlike some tight ends in the league, is that he can literally do it all. In fact, as much as he is a weapon with the ball in his hands, he might be an even bigger asset as a blocker. Having played for the Hawkeyes in college, Kittle learned the ins and outs of sealing an edge in the run game, knows how to get inside on a defender, and can lock up even the most vicious defensive end in the NFL.

George Kittle is a menace pic.twitter.com/pjy6LY1QMr

While his blocking is one of his best skills, Kittle is also a prolific pass-catcher. He has caught at least 70 balls in the last three seasons in which he has been fully healthy and eclipsed the 1,000-yard mark in two of those three years, falling 90 yards short last fall.

If Kittle is in the open field, good luck trying to bring him down.

Part of the reason that Kittle is such a valuable weapon in the passing game is his route running.

At his size, 6-foot-4, 250 pounds it is hard to find a cornerback that matches up equally. As a result, Kittle is often covered by linebackers. Or at least, they try.

Kittle’s athleticism makes it ridiculously hard for opposing defenders to stay on him. He recently showed off his staccato route running during a workout in Nashville and his twitch is simply unmatched.

There is just no way that a linebacker has any chance at keeping up with Kittle. He will either juke them out inside five yards, shake them with a vicious cut, or blow by them with his speed. George Kittle is absolutely nasty.