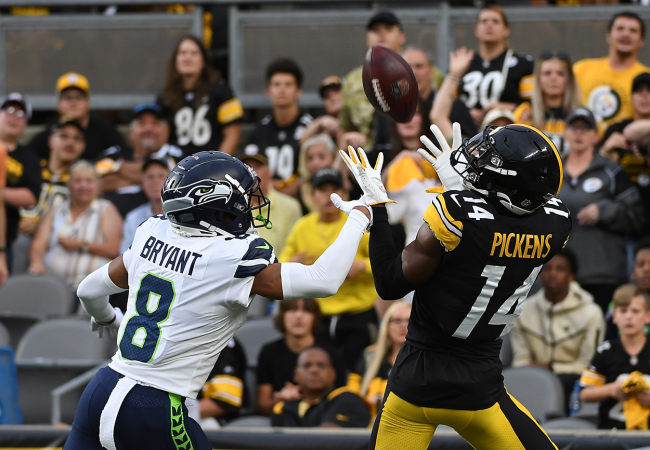 The Pittsburgh Steelers may have found a superstar wide receiver with the No. 52 overall pick in the second round of the NFL Draft. Although it’s a small sample size and it’s important not to overreact to the preseason, George Pickens may be him.

The 21-year-old rookie out of Georgia continues to turn heads every single day of every single week of his first training camp in the league. Pickens has been making ridiculous catches with the Steelers’ first team, shaking defensive backs to their core, and pulling down balls that rookies often cannot hang onto.

Saturday afternoon’s preseason game was no exception. The 6-foot-3, 200-pound pass-catcher was an absolute bully as a blocker within five yards. He even waved to the defensive back as he laid on the ground.

The way that Pickens got off of the ball and absolutely wrecked the defensive back was something that we saw in college, but it doesn’t make it any less vicious on the next level.

GP did it again 🤣🤣🤣😈 pic.twitter.com/yDQXIjhi6Z

Not only did Pickens establish himself as a physical blocker, he caught three passes for 43 yards and his first NFL touchdown. It was a great throw from Mason Rudolph— credit where credit is due.

While Rudolph dropped a dime, Pickens made a fantastic 1-on-1, toe-tap catch.

George Pickens is Him. 🔥 @steelers

After scoring the first touchdown of his NFL career, Pickens did his dance. Or, more specifically, he did Antonio Brown’s new dance.

Pickens “Put That Shit On,” marking the first AB dance of the year— of which there are sure to be many.

After the game, Brown approved of the young rookie’s celebration.

If Pickens keeps this up, he is on the fast track to becoming one of the best receivers in the game.