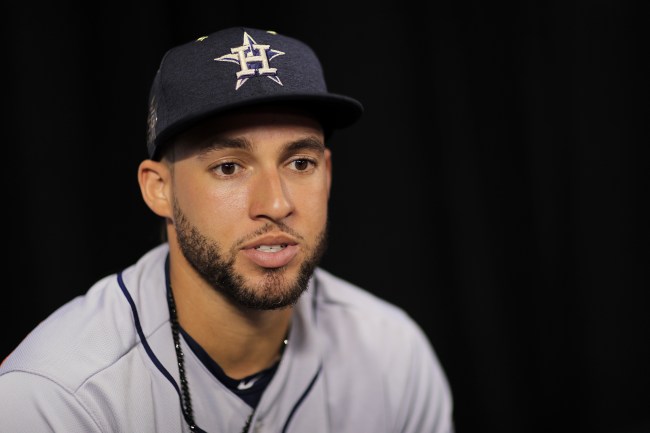 Houston Astros right fielder George Springer made his first All-Star appearance on Tuesday night, as his .310 batting average, 27 home runs, and 61 RBIs is a huge reason why his Astros are atop the American League standings.

For those of you who watched the game, you probably remember the 27-year-old fielding questions from Joe Buck and John Smoltz while playing right field. Springer jumped at the opportunity to be mic’ed up for the game, not because he is a glutton for attention, but because he is a lifelong stutterer and wanted to give inspiration to kids with speech impediments to not be ashamed to speak confidently.

Springer was interviewed on the field tonight and it was fantastic. #Astros pic.twitter.com/qPWR4tHZ28

Springer, who is a spokesperson for The Stuttering Association for the Young (SAY), claims that his stutter rarely comes out when he is speaking on topics he’s confident about so it wasn’t immediately apparent when talking shop in right field.

His interview after the game was pretty damn cool.

George Springer wore a microphone on national TV tonight, says his stutter is not going to stop him from talking. @sayorg #Astros #ASG pic.twitter.com/fL5Fsh4fBQ

“I can’t spread a message to kids and adults if I’m not willing to put myself out there,” Springer said. “I understand—I’m going to stutter. I don’t care. It is what it is. It’s not going stop me from talking or having fun.”

Springer’s teammates lauded their buddy’s courage to conquer something that was probably pretty difficult for him–“Lots of respect for that guy,” Carlos Correa said. “He’s conquered a lot,” said Dallas Keuchel.

As Springer said in a 2014 interview with MLB.com, the young star gave his refreshing take on his impediment:

Wish nothing but the best for this dude going forward. He seems like he deserves it.