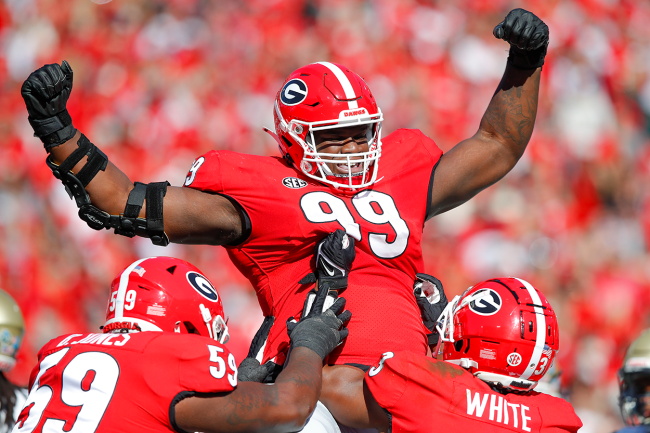 The man on the right is a normal sized human man.

The man on the left is Jordan Davis. Yeah this is what we mean pic.twitter.com/fIKRwIdPv0

The North Carolina-native signed with the Bulldogs as a three-star recruit and is now being projected to be drafted as high as the first round. Throughout his four-year career, Davis has recorded 82 total tackles and seven sacks. While his numbers are one thing, No. 99’s behemoth presence in the middle creates chaos for opposing offenses, particularly in the run game.

However, on Saturday, Davis was on the other side of the run game.

Undefeated Georgia hosted Charleston Southern for the program’s senior night and entered the game favored by 52.5.

It was going to be a boat race in front of a home crowd, which is the perfect way to honor the players leaving the team after this year. Jordan was among them and received a massive ovation when he was introduced.

Jordan Davis with quite the the ovation on Senior Day pic.twitter.com/i6UjtnfFS0

Later in the first quarter, head coach Kirby Smart decided to give him a curtain call— on offense. With the ball stacked up against the goal line on 2nd-and-goal, Davis lined up at running back.

He took the handoff and was stopped at the line of scrimmage.

they stopped him once. they did not stop him again. pic.twitter.com/80MMsU8qhB

On the very next play, Davis was still in the game. After lining up on the left side of the line and motioning into the backfield, Davis again took the handoff and went right up the middle.

Leaving his feet and diving across the line, Davis scored the first touchdown of his career.

To be a defender trying to get in his path and stop the effort looks absolutely terrifying.

Jordan Davis looks like a mack truck coming down 316 from Atlanta to the Classic City. pic.twitter.com/WBDSxWJCNR