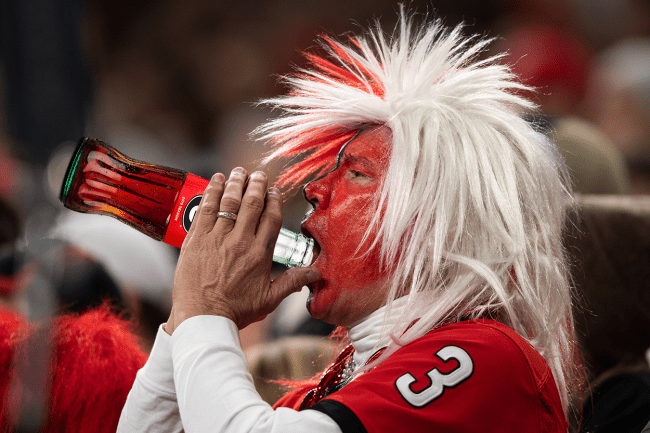 Here is what the bottle looks like, it’s super cool:

We’re all going to be sick this week aren’t we pic.twitter.com/3mIiZZzLwC

Over the years, UGA fans have joked that whenever their team won it all again, they’d crack open the bottle. Well, that’s exactly what happened on Monday.

Among the fans to put back the four-decade-old Coke was Derek Griffin. As the clock struck zero and the Bulldogs stormed the field, Griffin pulled out his can-opener, threw the top aside and chugged.

41 years and 13 seconds later, the bottle was empty.

And Griffin was not alone in his celebration. 57-year-old Wesley Mullins of Savannah, Georgia did the same.

He spoke with UGA Wire about his celebratory drink and said that he has three bottles, so he figured he could drink one. Griffin said that it was flat, but tasted okay.

As for how he was feeling after putting back the 41-year-aged Coca-Cola, Mullins said he felt like crap. However, it was not because of the soda.

“I think that was from the bourbon not the 1980 Coke,” Mullins told UGA Wire.

Two days after the win, Marc McAfee joined in on the celebration outside of Lucas Oil Stadium, where Georgia won on Monday. He took a shot at Pepsi in the process.

According to Coca-Cola, their soda can last for 6-9 months after the expiration date printed on the container if stored properly and unopened. The 1980 Georgia Cokes were opened long after that date, but it was probably the best-tasting Coke of them all.