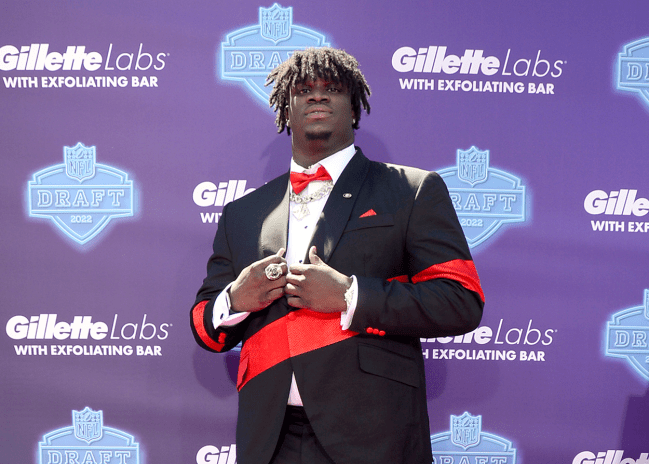 Georgia football is coming off of a College Football Playoff national championship and the Bulldogs are taking every chance to flex on everybody. That was certainly the case on Thursday night.

As the NFL Draft got underway from Las Vegas, the red carpet was rolled out across the Bellagio fountain. And as is to be expected, the players who were invited to be a part of the Green Room brought the drip.

Among those invited were Jordan Davis and Nakobe Dean. Both guys played an integral part in getting Georgia to the top and both guys came through with the heat to the NFL Draft.

In addition to their stylish suits and flashy shoes, Dean and Davis brought the ice. They showed up with their national championship rings and flexed on everybody.

As Davis showed off his ‘fit, he made sure to let everybody know that he brought the Bulldogs a natty for the first time in more than four decades. It was an integral part of his ensamble.

Both Dean and Davis are expected to hear their names called on Thursday night, though Dean could fall to Day 2 if things get chaotic. Either way, they both looked awesome on the red carpet and took the chance to let everybody know that they’re the top dogs— literally.