LOOK: The NFL Draft Has A Boat Ready In Case A Player Decides To Jump In The Bellagio Fountain 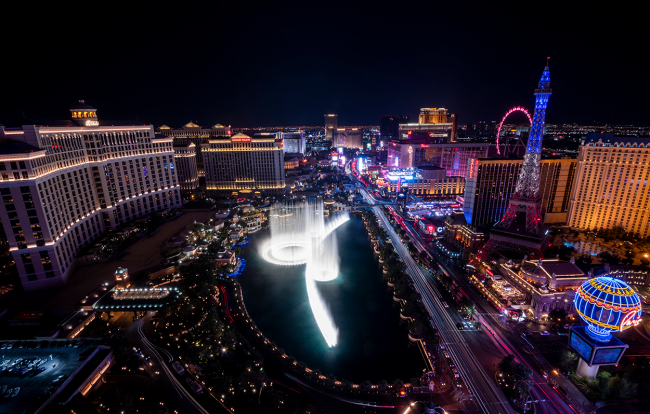 Two years after the NFL Draft was supposed to be held in Las Vegas, Nevada, it is finally happening. When the Jacksonville Jaguars are officially announced to be on the clock, it will mark the start of a three-day party for players, fans and franchises alike.

Originally, the plan was for the draft to be held in the middle of the Bellagio fountain. When a player in attendance heard his name called, he was going to get onto a boat and be ferried out to the stage.

It was too good of an idea to be true pic.twitter.com/b3kDNQqBog

The boat ended up being nixed, but the Bellagio background ended up coming true.

Bellagio fountains, with the NFL draft stage in the water. #NFLDraft2022 pic.twitter.com/HqurACRybm

Here is a look at the NFL Draft stage set-up in Las Vegas:

The incredible backdrop could not be more perfect.

And the red carpet is ready.

It’s almost time for #NFLDraft prospects to take the Red Carpet here in Las Vegas right in front of the famous Bellagio fountains. The scene is incredible. @NFL pic.twitter.com/Oh8Gu9eKlc

On the night before the draft, the city gave a taste of what is to come. The Bellagio fountains took a break from their normal routine and gave it an NFL twist.

Taking over Las Vegas for the @NFLDraft 🤩 pic.twitter.com/bNKhC2VqZD

On draft day, fans started to line up on Las Vegas Boulevard more than six hours ahead of the first pick.

It might be several hours from the start of festivities, but fans already starting to populate Las Vegas Boulevard in front of the Bellagio. #vegas #NFLDraft pic.twitter.com/GuATvjFqME

With everything ready to go for the big night, there was always one looming question—

Will one of the first round NFL Draft picks go full-send after having his name called and jump into the Bellagio fountain? And if they do, what happens?

Well, the NFL has a plan. Should one of the first rounders jump into the fountain (or if someone somehow slipped and fell in), there will be a rescue crew at the ready.

The “pick up” team is ready just in case a draft pick decides to jump in the Bellagio water after walking the red carpet. pic.twitter.com/ZcErLdwGat

Assuming that there is not a fountain-jump in mind, the “pick up” team presumably will have a light workload. However, if there is a prospect with plans to belly flop, it would be one of the greatest moments in NFL Draft history. Fingers crossed.