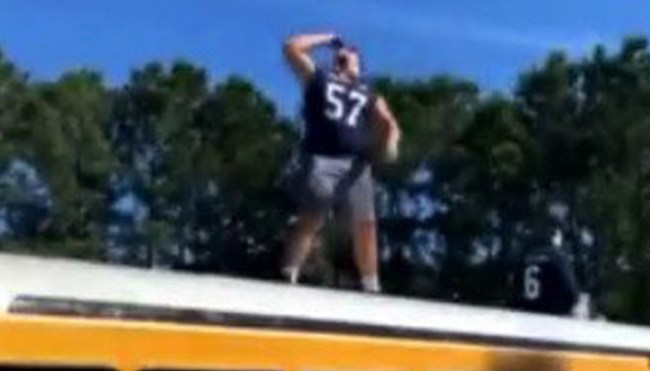 Most college students are intimately familiar with the concept of “pregaming,” a time-honored tradition that allows you to not only save a bit of money before hitting the bars but ensures you’ll arrive with a solid buzz you can use as a foundation for the rest of the night.

However, one Georgia Southern football player took the term a bit too literally over the weekend, as linebacker Gavin Adcock decided there was no better way to gear up for Saturday’s contest against Louisiana than chugging a beer while perched atop the school bus transporting the Eagles to the game.

Erk I’m sorry for this foolery, excuse me but what the fuck is this? Who singing the valley song? This man is swag surfing the bus and get a stone cold Steve hammer beer pass and chugged it flawlessly. Before the football game. Wow. pic.twitter.com/yoeBG6oc6X

Unfortunately, whatever liquid was contained inside the can did not possess the same magical powers as Michael’s Secret Stuff. Georgia Southern would ultimately lose the matchup by a score of 28-20, and it didn’t take long for head coach Chad Lunsford to find himself out of a job after the team dropped to 1-3 on the season.

It would appear Adcock will also be prevented from doing his job for the foreseeable future, as Yahoo Sports reports Georgia Southern athletic director Jared Benko hit the senior linebacker with an indefinite suspension over the beer-chugging stunt.

To his credit, Adcock resisted the urge to release an apology that reads “I’m sorry I got suspended for being too awesome,” as he posted what seems to be a pretty genuine mea cupla on Twitter with the help of the trusty Notes app.

I love this place with a deep passion! Always Hail Southern!! GATA !!💙🦅 pic.twitter.com/tY3Zu5dssX

In other words: Adcock is sorry for partying.