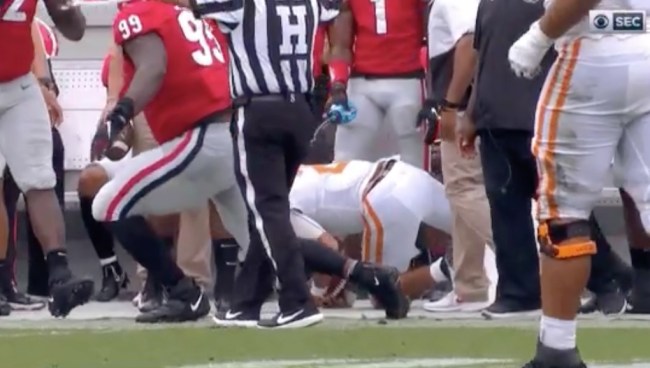 Tennessee and Georgia do not like each other one bit and seemingly every year when these two teams meet up for their rivalry game something memorable happens. In 2016 it was Tennessee’s Hail Mary as time expired, but this season’s memorable moment may have actually come on the sideline.

With the Vols attempting to put some points on the board before halftime, quarterback Jarrett Guarantano was shoved out of bounds on the Georgia sideline. Instead of just jawing at Guarantano, Georgia wideout George Pickens decided to get up off the bench, walk over to Guarantano, and spray him with his water bottle.

He was immediately flagged for unsportsmanlike conduct. Five plays later, Guarantano found Josh Palmer in the corner of the endzone to give Tennessee a 21-17 lead.

The CBS announcers called the play immature and explained that Palmer has some immature tendencies. It doesn’t get much more immature than walking over to a player on the ground and spraying him with water two feet from an official, but hey, rivalry game!

Tennessee carried all of the momentum into halftime after its late touchdown and goal-line stand on the Bulldogs as time expired in the second quarter.