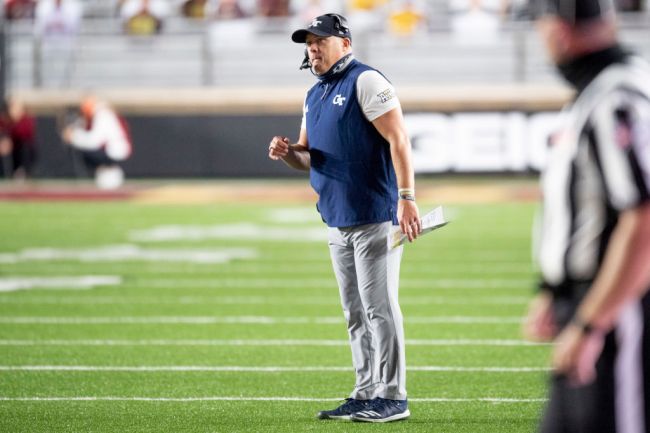 Georgia Tech fell to Pittsburgh at home on Thursday night by a score of 34-20 and Yellow Jackets head coach Geoff Gollins was not happy. After the game he met Pat Narduzzi at midfield, gave him a quick handshake and immediately bolted the other way.

The game was a blowout, but it the losing coach is clearly still upset with some questionable officiating. During the home team’s final drive, Collins was up in arms about what he believed should have been pass interference. Quarterback Jordan Yates threw a jump ball to his receiver, but it was deemed uncatchable.

It was a two-touchdown game with under a minute left so the game was all but over and the handshake dupe was uncalled for.

The Panthers improve to 6-5 with a win in their final regular season game of the year and may sneak into a bowl game while Collins and the Jackets move to 3-7. Neither school has any particular beef with one another, but a rivalry between the two would be very fun. It seemed as though Narduzzi was upset with the postgame reaction in the moment but he took it pretty well after the fact. He addressed the incident in his media availability and seemed perplexed.

“I just said, ‘Hey, you have a great team.’ And he said, you know, that’s baloney, I guess. They were nice words. Then he walked off. I don’t know. Thought it was a good game.”

The 54-year old also made a crack on twitter.

On the other hand, Collins claims he didn’t mean to blow Narduzzi off.

Had to ask Geoff Collins about the handshake at the end of the GT-Pitt game. Says he didn't mean to blow off Pat Narduzzi. Video seems to tell a different story #ACC #GaTech #Pitt pic.twitter.com/hRJxBUFR8L