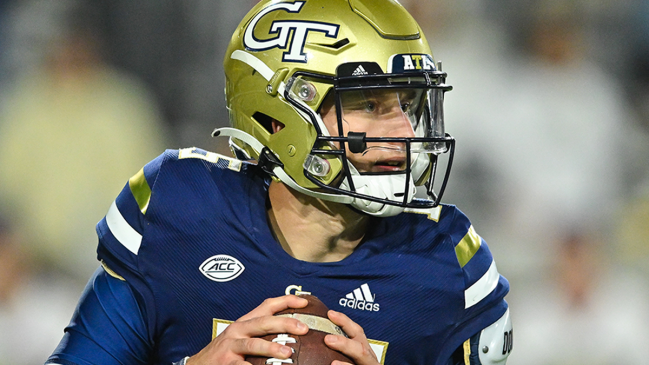 The arrival of college football’s NIL Era may have officially eliminated the “amateur” nature of the sport, but it hasn’t done much to minimize the impact of one factor that’s traditionally added an extra level of intrigue: the possibility of a player making a truly inexplicable decision at an incredibly crucial moment in a game

It would obviously be foolish to suggest the pros don’t occasionally fall victim to similarly costly brainfarts. With that said, the combination of the comparatively low level of talent and lack of experience at the college level means players are a bit more predisposed to committing baffling errors like the infamous “Cleet Yeet” that’s seared into the brain of every Florida fan who watch the Gators get upset by LSU in 2020.

We were treated to our latest example of that reality when Georgia Tech faced off against Virginia on Thursday night in a contest that came to a very interesting end courtesy of Yellow Jackets backup quarterback Zach Gibson.

Gibson was tapped to replace Jeff Sims after the team’s starter was injured in the second quarter, and while the backup QB had a chance to lead his team to an incredibly improbable comeback on the final play of the game, it ended with the ultimate whimper after he let the clock tick down to zero while scrambling before trotting out of bounds to seal the 16-9 loss to the Cavaliers.

Georgia Tech is down to their last play, the QB scrambles to his left, he’s scrambling, rolling left and he……runs out of bounds to end the game. pic.twitter.com/1R1MxXaQp8

It wasn’t the only big mistake a player committed in the game, but it’s easy to understand why most people who watched the play unfold reacted to it with some variation of “WHAT THE HELL WAS HE THINKING?!?!?!”—a question we have an answer to courtesy of the man himself.

After the loss, Gibson talked with Ken Sugiura of The Atlanta Journal-Constitution about the one play on everyone’s mind. The QB admitted “I should have thrown it” after getting a chance to reflect on a decision he acknowledged was “not a good look,” but also stressed there was only so much he could do in the situation.

.@ksugiuraajc asked Georgia Tech quarterback Zach Gibson about running out of bounds on the final play, if he didn’t realize how much time was left on the clock.

While the “It’s One Play” excuse doesn’t always hold up to a ton of scrutiny, it’s hard to place the blame entirely on Gibson’s shoulders here; the offense as a whole failed to capitalize on the four turnovers the defense was able to force, and while Georgia Tech technically had a chance to win the game on the final play, the odds they were ever going to find the end zone with the ball on their own 36-yard line with seven seconds on the clock were incredibly slim.