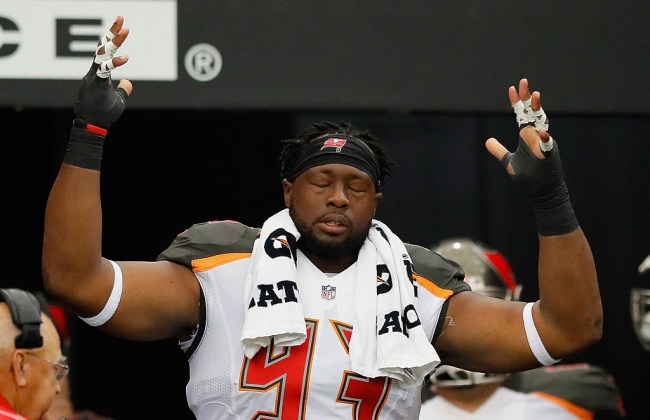 Tampa Bay Buccaneers Pro Bowler Gerald McCoy is tired of all the keyboard warriors talking trash to him on social media. Following Tampa’s unsettling loss to the Vikings (and, gasp, Case Keenum) 34 to 17, Bucs fans felt the need to take out their frustration on McCoy online.

Needless to say, McCoy, who has been one of the best players on the team since 2010, was not thrilled with the awful things people were saying to him. So he offered a very reasonable solution: meet him at the Bucs facility and he’d be more than willing to have a little chat with them.

“There’s a bunch of people out there that say a lot of terrible things that I know they wouldn’t say to our face,” McCoy said. “These social media tough guys. I would love to meet them. Just being honest. … I would love to meet you. I work at One Buccaneer Place if you would like to talk to me. I’m not going to give you my home address, but I’ll meet you up here anytime you want to talk about it.”

“I’ll never put my hands on anybody. This is not a threat. But you know where I work,” he said. “There’s a front desk. Knock on the door. ‘I want to talk to Gerald about the game yesterday.’ I will see you out there. We can hold court.”

Like I said, McCoy was actually being very reasonable.

Unfortunately, for some reason, the Buccaneers don’t want a crowd of disgruntled fans hanging out at their headquarters.

In order to gain entrance, the Bucs said Tuesday, you must either have official business with the team or an employee or a visitor form that has been filled out and left at the guard gate on your behalf. That’s always been the policy and the Bucs say they will not suspend its security measures because McCoy felt he and some of his teammates were disrespected on social media.

I don’t know. I think that having a little sit-down with one of your team’s best players would qualify as “official business,” don’t you?

Heck, McCoy might even show up wearing this slick suit…

If that doesn’t say “official business” then I don’t know what does.