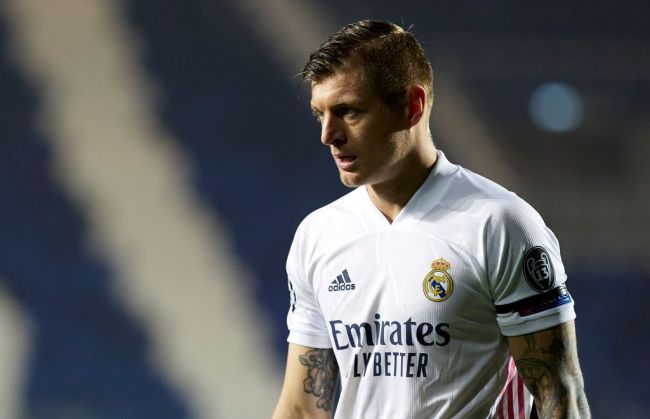 Qatar was awarded the 2022 World Cup in 2010 and there has been a lot of well-deserved backlash about the decision since it was announced. Amongst the criticism, German midfielder Toni Kroos spoke out on Wednesday and said it was “wrong” that Qatar was given the opportunity to hold the event, adding that it could be appropriate to highlight human rights issues during the tournament.

Germany has been one of the many countries to make a statement during the World Cup qualifier games, wearing shirts that spelled out “Human Rights” ahead of their first match against Iceland last week, and again against Romania. Norway, led by 22-year-old superstar Erling Haaland, as well as Denmark, and the Netherlands have made similar statements. However, Kroos is the first international player to actively speak out against FIFA’s decision to grant Qatar the World Cup, doing so on his podcast Einfach mal Luppen.

“Many of the laborers are migrant workers from other countries and they work without breaks in up to 50 degree heat. They suffer under inadequate nutrition and lack of drinking water, which is madness in those temperatures,” he said. “Their safety is not guaranteed at all, there is no medical care and there are also examples of violence against workers.”

He also addressed the country’s laws on homosexuality.

“Homosexuality is also illegal in Qatar and is persecuted,” Kroos added. “These are issues which are simply unacceptable, there can be no two ways of looking at it.”

This is a huge deal. Kroos is directly calling out the governing body of international soccer, which is something that does not typically occur. He also addressed the significance of the issue, noting that he does not believe in a boycott of the tournament. Seven Norwegian clubs have urged their country’s football association to withdrawal, and the Norwegian FA will hold a meeting to discuss the issue. Kroos is not convinced that any country choosing not to partake is the best way to proceed.

“What would a boycott achieve? Would it change the working conditions? I don’t believe it would,” he said. “These conditions don’t just exist because the World Cup is taking place in Qatar, the situation is generally like that there, so boycotting the World Cup won’t change anything.”

Instead of shying away from the problem, Kroos believes that footballers can, and “must,” use their voice to draw attention to the problems, “again and again, in the build-up to the tournament or maybe even during it, so that perhaps things will improve as a result.”

If teams were to protest FIFA during the World Cup, the organization’s brain might explode— which would be awesome to watch, and may actually spark a move toward change. It is known to be one of the more corrupt governing bodies in the world, caring not for its constituents, but only for things that are self-serving. Most notably, more than 10 FIFA officials were indicted and an investigation was opened into this upcoming summer’s World Cup.

Meanwhile, in Qatar, a recent report from The Guardian estimates that at least 6,500 migrant workers from Indian, Pakistan, Nepal, Bangladesh and Sri Lanka have died while working to build the infrastructure for the tournament. That number is believed to be a severe underestimate, as numbers are not always accurate and they do not include deaths from a number of countries which send a large number of workers to Qatar, including the Philippines and Kenya. It also does not include deaths in the final months of 2020.

Deaths records are not categorized by occupation or place of work, but over the past 10 years, Qatar has embarked on an unprecedented building program and many of the deaths likely occurred in preparation for the World Cup. In addition to seven new stadiums, dozens of projects include roads, a new airport, public transit, hotels and an entirely new city, which will host the tournament final.

Kroos’ decision to openly speak out on the topic is the first step to fixing a long-standing problem within the world’s soccer association. However, if he, his countryman, and other countries around the world were to continue to amplify their very prominent voices through the World Cup, it would be a monumental moment.