Gerrit Cole Basically Disowns The Astros After Not Being Used In Game 7 Loss: ‘I’m Not An Employee Of The Team’ 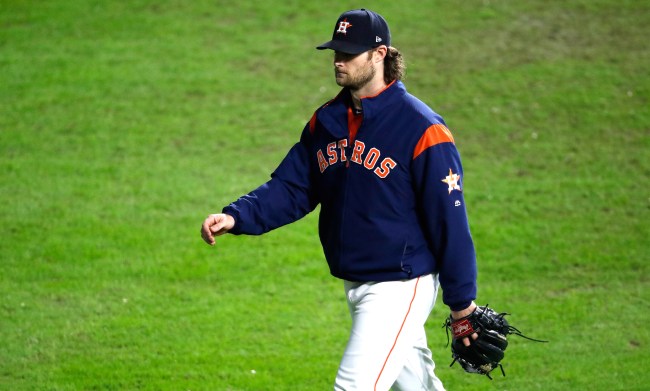 See that picture up there of Houston Astros ace Gerrit Cole? That’s him walking to the bullpen in Game 7 of the World Series, and in turn, straight out of Houston as a free agent after manager A.J. Hinch inexplicably didn’t use him in the series’ deciding game.

After the Nationals defeated the Astros to win their first World Series, Cole was in no mood to talk to the media, telling a reporter that he is “not an employee of the team” and wearing a hat with the logo of his agent Scott Boras’ company.

“I’m not an employee of the team,” Cole told an Astros spokesperson. “I guess as a representative of myself…”

Gerrit Cole, an impending free agent, was resistant to talk after Game 7.

“I’m not an employee of the team,” he said to an Astros spokesperson. “I guess as a representative of myself…” Then he spoke.

Gerrit Cole was asked to speak to the media postgame.
The soon to be free agent said,

“Do I have to do it? Technically, I’m unemployed.”

Cole was kind enough to oblige then said..

“It was a pleasure to play in Houston.”#WorldSeries

Cole did end up speaking to the media, but he certainly looked and sounded like a man who already has one foot out the door.

#Astros pitcher Gerrit Cole and his thoughts on not pitching in tonight's game 7.

Tonight could have been Cole's last night in Houston, he is due to be a free agent this winter and is due to get paid big. pic.twitter.com/71RsZlkOWm

According to MLB.com reporter Alyson Footer, Astros catcher Robinson Chirinos said about Gerrit Cole after the game, “I thought he was going to have a chance to pitch tonight. He went down to the bullpen in the fifth inning and said, ‘I’ll see you later today.’ I was waiting for him to come into the game.”