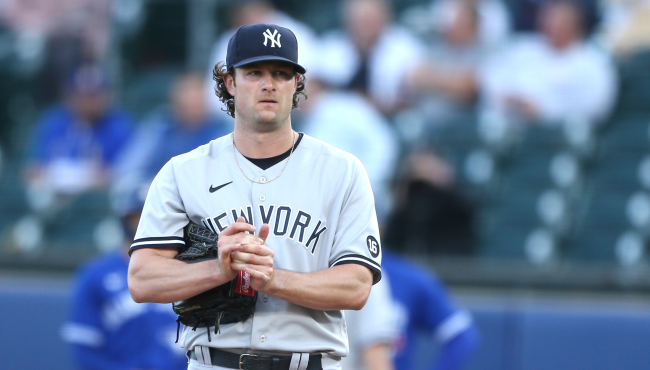 Last week, Cole basically outed himself as one of the many pitchers who has been utilizing some form of illegal substance to get a better grip on the baseball.

.@KenDavidoff with the question. The answer is obviously yes. pic.twitter.com/CdjlLhwihM

However, as we have seen over the past couple of weeks, the 30-year-old Cole is far from alone.

We have also now seen that while using a sticky substance while pitching definitely gives pitchers the ability to put more spin on their pitches, it also helps them control pitches that continue to increase in velocity each year.

Also, as Tyler Glasnow pointed out on Tuesday, making this change mid-season could potentially cause injuries to pitchers who have to adjust… like him.

Glasnow added, “Do it in the offseason. Give us a chance to adjust to it. But I just threw 80 innings, then you tell me I can’t use anything in the middle of the year. I have to change everything I’ve been doing the entire season. I’m telling you I truly believe that’s why I got hurt.”

After his start on Wednesday night, Gerrit Cole was once again asked about the sticky stuff.

“It’s so hard to grip the ball,” a frustrated Cole said after the New York Yankees’ 3-2 win. “For Pete’s sake, it’s part of the reason why almost every player on the field has had something, regardless if they’re a pitcher or not, to help them control the ball.”

Cole continued, “We are aligned in a lot of areas with the commissioner’s office on this. … Please, just talk to us, please just work with us. I know you have the hammer here. But we’ve been living in a gray area for so long. I would just hate to see players get hurt. I would hate to see balls start flying at people’s head. I had a really tough time gripping the baseball tonight, especially early when it was windy. I don’t really care to be inflammatory here, so I am just going to leave it at that.”

It wasn’t all melancholy after the game for Cole though. He also shared a light moment with a reporter when she asked him about the ridiculous 95 mph changeup he threw for his last pitch.

Lindsey Adler, the reporter who asked the question, received all sorts of compliments, and a few jokes after asking a very legitimate question.

please don’t look at me

Me: Gerrit, was that a 95 mile per hour changeup?
Gerrit: Yes
Me, reflexively: How?

Statcast, please add another swing and miss on the CH for Cole tonight.

(The answer was that after the 101.5 mph fastball, Cole had to replicate the arm speed for the changeup, hence the 95 mph.)