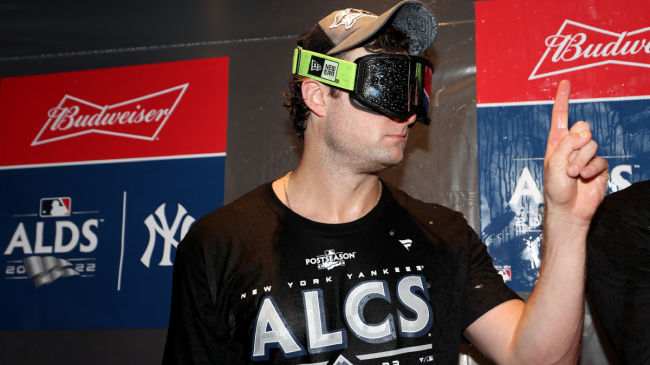 The New York Yankees punched their ticket to the ALCS on Tuesday night, defeating the Guardians 5-1 in a highly competitive series. The ALDS matchup went five games, with the clubs splitting the first four contests.

New York prevailed in the series finale to send fans home happy in the Bronx.

A big part of that ALDS win was pitcher Gerrit Cole. The righty made a pair of starts, taking the mound in two of the Yankees’ three wins.

He was on the bump in Game 2, throwing 6.1 innings of one-run ball while striking out eight batters. He followed it up with another solid performance in Game 4, pitching seven innings in a 4-2 win.

Both wins dug the Yankees out of series deficits, and both were integral to the ALDS win. So, you’d think that Cole would be over the moon in the postgame festivities after Game 5. He looked anything but.

Videos have surfaced showing Cole tucked off in a corner alone, slow sipping a Budweiser while watching his teammates party. The viral clips have created a hysterical reaction on social media.

After looking almost annoyed to be in the locker room, Cole walked out of the celebration. Not a smile, no jubilation. Just an Irish goodbye.

Fans had some fun with the moment online.

One person likened him to Kobe Bryant, referencing a hilarious clip of the NBA star being completely emotionless following a playoff victory.

Gerrit Cole during the Yankees celebration after the win last night: pic.twitter.com/jr8qUPKwZC

Another fan wrote, “Gerrit Cole definitely checked his weather app during the celebration,” while someone else commented, “The most unintentionally hilarious person on Earth.”

Cole was all business after the game. Rather than let loose, he was already thinking about the next series.

“I’m hoping we do some scouting reports on the plane so I can sleep in.”

Maybe if the Yankees advance to the World Series, he’ll show some enthusiasm. But I doubt it.