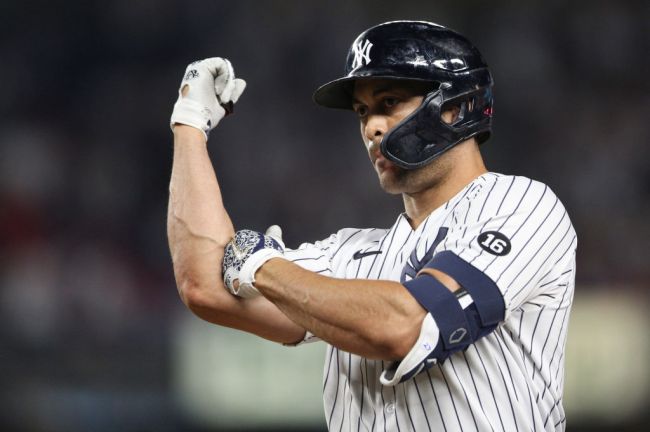 Ever since Statcast was implemented in 2015, nobody in the MLB has hit a baseball harder than Giancarlo Stanton. And while Statcast only date back six years, it’s fairly safe to assume that Stanton’s record transcends all of history.

The 31-year-old Yankee slugger tied his own record during the first inning of Monday night’s game against the Royals. He frequently muscles up for triple-digit readings but it doesn’t always yield results.

That was the case against Kansas City. Stanton stepped up to the plate with a 3-2 count and drove the offering from Carlos Hernández back up the middle at a record 122.2 miles per hour.

The missile off Stanton’s bat rocketed to second baseman Whit Merrifield, who flipped the ball to shortstop Nicky Lopez. Lopez stepped on the bag and sent the ball back to first base for the 4-6-3 double play.

The Yankees' specialty rears its head in the first inning! pic.twitter.com/PzR03OVwgx

Here is (kind of) what it looks like to field the hardest hit in baseball history:

What it's like to field a 122.2 mph ground ball — thanks to Giancarlo Stanton, Whit Merrifield and #MLBFieldVision pic.twitter.com/cwniZuKUZ1

Stanton, who stands 6-foot-6, 245 pounds, now has 12 hits in his career with an exit velocity of 120mph or more. There has been only one other player to ever hit the 120mph threshold.

His 122.2mph double play ball on Monday tied his own top speed from Oct. 1, 2017. While with the Marlins that day, Stanton hit a 122.2mph single off of Braves pitcher Max Fried.

As for hardest-hit home runs, Stanton holds that record too. He crushed a ball 121.7mph for a solo home run with the Yankees back in 2018.

Technically, this is all in the Statcast era since 2015, but it’s hard to imagine anyone else hitting a ball with more force. Mark McGwire and Barry Bonds may have come close, but Stanton’s ability to crush a baseball is pretty unprecedented.