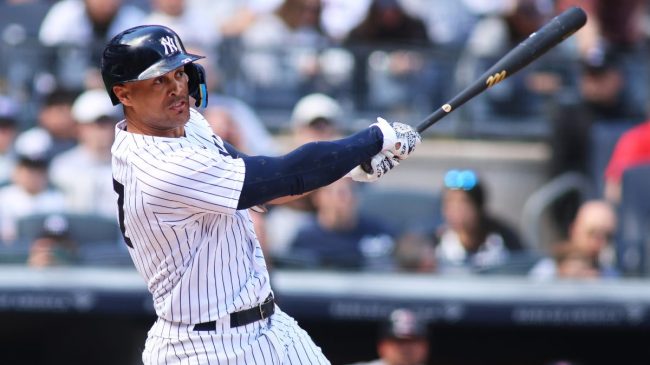 The New York Yankees have gotten off to a hot start in the 2022 season.

The Bronx Bombers have earned a pair of wins over archrival Boston to begin the year with an exclamation mark. They’ll now have an opportunity to land an opening weekend sweep over the Red Sox on Sunday.

Game one was a classic, going into extra innings before the Yankees walked it off in the bottom of the 11th. Game two saw New York win 4-2 thanks to a pair of home runs from the middle of the order.

One of those deep shots came from outfielder Giancarlo Stanton, which continued an interesting streak against the Sox.

Stanton has now homered in six consecutive meetings versus Boston. He’s the first person to ever accomplish that feat against the Bo Sox, giving the slugger ultimate bragging rights over his rival. His long ball yesterday gave the Yankees the lead for good.

The six-homer streak is quite the achievement, and it had folks talking on this opening weekend of action. Many are alluding to the fact that Stanton absolutely owns the Red Sox.

Stanton is the Red Sox daddy. It just is what it is.

Stanton is still a monster.

It does seem that way.

Since becoming a Yankee, Stanton is hitting .290 with 10 homers. He’s been a Boston killer, particularly over these last six contests (dating back to last season).

Giancarlo Stanton against the Red Sox *as a Yankee* entering today, per FanGraphs:

New York will try to close out the sweep on Sunday. We’ll see if Stanton can extend his streak to seven in the series finale.