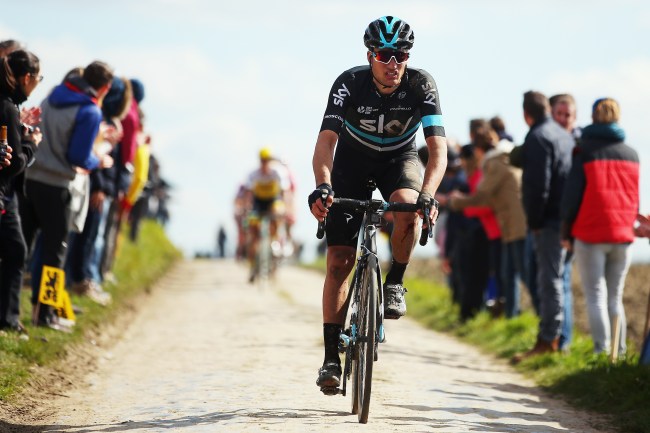 Italian Gianni Moscon just committed the biggest crime on a bike since Lance Armstrong and literally the entire professional field was pumping themselves full of horse tranquilizers mid-race.

The Team Sky rider was disqualified from the Tour de France for punching an opponent mid-race in the first half-mile of Stage 15. According to the New York Post, Team Sky will spend Monday deciding whether or not they’ll fire the 24-year-old instigator, who just last year was suspended for for six weeks for spewing racial slurs at a French competitor during a race. He was also accused of purposefully crashing Sebastien Reichenbach during the Tre Valli Varesine, but the case was thrown out due to lack of evidence.

On Sunday, Moscon, one of cycling’s top talents, swung his right arm at Frenchman Elie Gesbert’s face as the two ride in the peloton from Millau to Carcassonne.

Watch: This is why Gianni Moscon was disqualified from the 2018 Tour de France (video) | https://t.co/vJYnAdRJFM #TdF2018 pic.twitter.com/K6lnRiRcG0

“I’m sorry for today’s incident and I totally regret my actions,” Moscon said. “I would like to personally apologize to Elie Gesbert for the incident on today’s stage. What happened was wrong and was a bad example coming from me to everyone. I want to publicly apologize for what happened to my teammates, everyone involved in Team Sky and everyone involved in the Tour de France.”

Moscon’s actions could turn out to be especially bone-headed considering teammates Geraint Thomas and Chris Froome are ranked first and second in the overall standings, and having a man down in the Pyrenees in the final week may prove to be catastrophic.