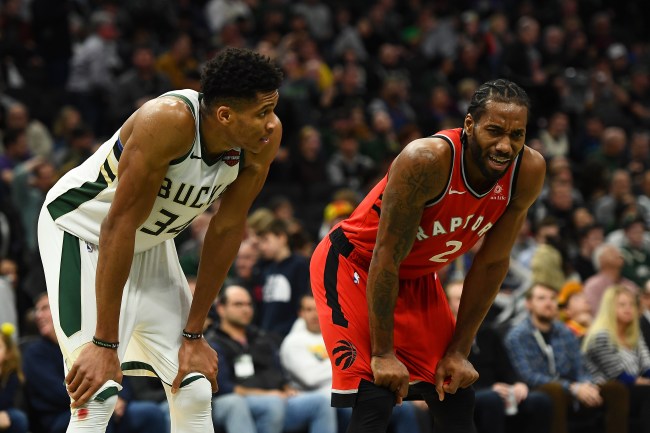 Giannis Antetokounmpo and Kawhi Leonard are two of the biggest athletes on the planet, with fans stretching all over the world. And, while Giannis is the probable NBA MVP and Kawhi is hoping to lead his Toronto Raptors to an NBA Finals victory, there are plenty of people around the world who are already giving them quite the impressive victory — because their names are among the most popular some are choosing for their own kids.

According to info from the U.S Social Security Administration late last month, per USA Today, Giannis Antetokounmpo and Kawhi Leonard are just two athletes who people love enough to call their kids by the same first name. Others include athletes like Baker Mayfield and Odel Beckham Jr. of the Cleveland Browns, Kyrie Irving of the Boston Celtics and Le’Veon Bell of the New York Jets. Altogether, take a look at the increase in popularity of these athletes names for random-ass babies.

This is all pretty funny stuff, because, as we all know, sports fans are crazy and will go to great lengths in order to show support for a team, athlete and/or keep a superstition going. I mean, hell, if I had a baby born in 2016 — when the Cleveland Cavs won a title — you better believe my kid would bee named “LeBron,” regardless of gender.

You can check out more info from the popularity of babies being named after athletes like Giannis Antetokounmpo and Kawhi Leonard over on USA Today, which actually includes a decrease in kids named after both James and MLB’s Bryce Harper over the past few years.