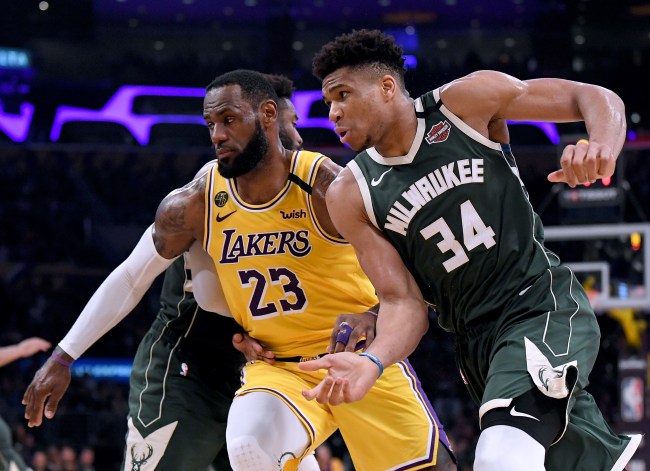 After beating the Milwaukee Bucks and the LA Clippers over the weekend, many TV analysts began giving LeBron James the MVP award over Giannis Antetokounmpo despite the fact that Giannis currently averaging 29 points, 13 rebounds and six assists per game.

LeBron James just made his case for MVP. He’s atop my ballot after this weekend. pic.twitter.com/5zCZfxj1TT

"Why are we not keeping the same energy for Giannis?!"@KendrickPerkins makes a very interesting case for LeBron for MVP. pic.twitter.com/EJ8n2e5H4I

"LeBron is the MVP. Point-blank. Giannis had his run last year." — @DaTrillStak5 pic.twitter.com/80zSybevX7

While several talking heads have crowned LeBron the MVP several likely voters were polled by Rob Perez and Matt Moore of the Action Network and they have Giannis winning by a landslide.

Reporting w/@HPbasketball: after conducting an anonymous poll with 43 possible voters, Giannis would be named NBA MVP by a significant margin if the season ended today.

72% of voters classified themselves as "certain" with their selection.

For two days, the MVP discussion in certain circles reflected an apparent massive change after Sunday.

So we polled 43 potential voters or those with a voter profile across markets and mediums.

Here’s what we found. And we have a strong projection.https://t.co/8WkzHEkeNL

Charles Barkley seems to agree with the polled voters and is confused by all the LeBron MVP talk.

You’ve got these fools, idiots and jackasses on TV,” B. “Listen, LeBron’s amazing, but what Giannis is doing is incredible. And we can give LeBron love because he’s an amazing dude, amazing man and a great, great, great player, but this thing where they’re trying to say, ‘Well, the MVP race is close’ — let me tell you something, Dan: If LeBron was back in Cleveland, playing with a bunch of nobodies, he was 59-6, no matter how good a year everybody else was having, nobody would be saying, ‘Oh, no, man, maybe somebody else should win MVP ’cause he plays in the Eastern Conference.’ That’s total B.S., and it makes me mad because I’m not like these other people. When somebody tells me something on TV I’m (not) like, ‘Well, it must be true, this dude said it.’ No, dude, I’m actually watching the games. What Giannis and the Milwaukee Bucks are doing is incredible, and if that man gets screwed out of the MVP because everybody wants to swing on LeBron, it’s going to really piss me off.”