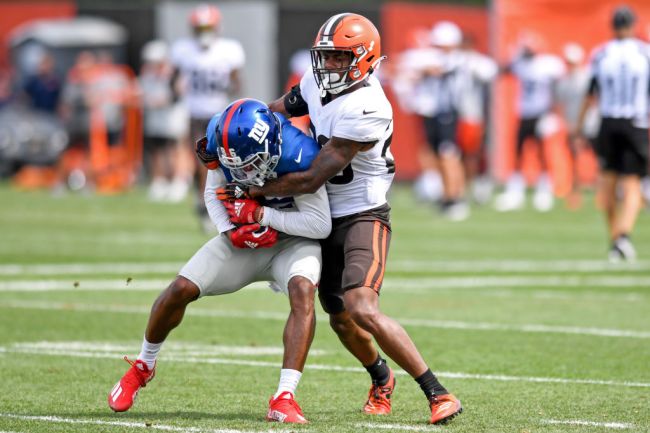 Browns cornerback Troy Hill is a six-year NFL veteran in peak athletic shape. Despite his form, he is a terrible boxer.

Things got chippy during Friday’s joint practice between the Browns and the Giants and Hill was in the middle of it. Ahead of Sunday’s preseason game, the two teams met in Cleveland for a tense, two-hour workout.

The practice got friskier as the day went on and both head coaches agreed to call it a day. Joe Judge and Kevin Stefanski got their respective teams into groups and finished the day without quarrel.

It didn’t take long for that to change.

After both teams broke their huddles, harsh words led to punches thrown. Earlier in the day, Hill had driven his shoulder into New York receiver Sterling Shepard after a reception.

Shepard spun off and finished the play before going back and head-butting Hill. The play ended without any further altercation.

This occurred during practice pic.twitter.com/WOKdYUhQ1i

When the day was over, however, the two circled back and threw punches.

A clip of the end of the fight between Browns CB Troy Hill and Giants WR Sterling Shepard. #Browns pic.twitter.com/S5GYuNJhYz

Photos of the kerfuffle showed the two squaring up with one another. Shepard looks fairly comfortable. Hill does not.

He has clearly never been in a fist fight because he squared up like he had no idea what he was doing and looked rather funny doing it.

Unfortunately for Hill, the internet took notice and clowned him accordingly.

Tbh, that's a better stance than Hill had lol

You know a mf can’t fight if they fist look like this pic.twitter.com/EdbS8wsUL7

Dude in the back looking at Troy hill like “bruh wtf you doing?” 😭😭😭 pic.twitter.com/WZGeFmOl32

Shepard did not address the fight in his post-practice interview.

Had the skirmish elevated beyond “friendly competition,” it looked like Hill was about to get worked by Shepard. The two teams face each other on Sunday.