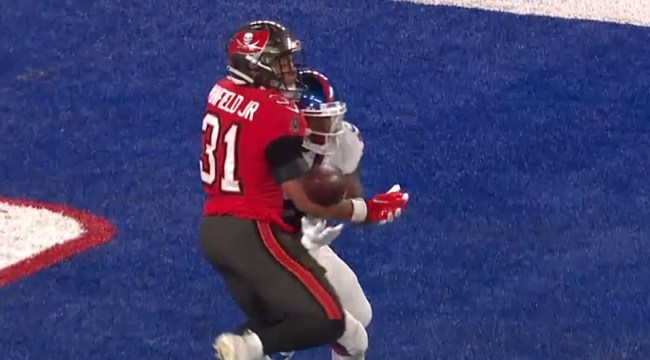 With 28 seconds left to go in the fourth quarter, the Giants scored on a touchdown pass from Daniel Jones to Golden Tate to make the game 25-23.

The Giants proceeded to attempt a two-point conversion to tie the game and Jones went on to throw a pass for Dion Lewis that was incomplete after some contact from Bucs safety Antoine Winfield Jr.

The refs initially called defensive pass interference but then changed the call after conferring on the field.

Giants fans felt the play should have been called pass interference because Winfield Jr. hit Lewis before the play was broken up.

Ball should have been sooner & in a better location but you CAN’T tell me this isn’t Pass Interference @Giants got some BRUTAL calls against them tonight #TBvsNYG pic.twitter.com/FQNaBaWofD

That was absolutely, 100 percent, pass interference.

He literally runs into him before the ball arrives lmao pass interference 😂😂😂 Brady getting bailed out again pic.twitter.com/Ucg0zwF1tq