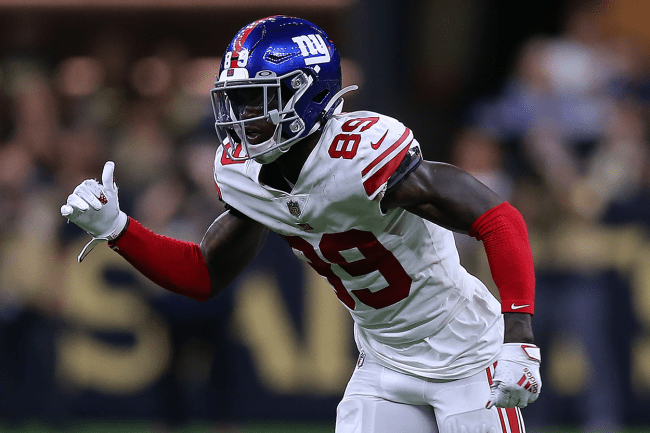 When the New York Giants drafted Kadarius Toney with the No. 20 overall pick in the 2021 NFL Draft, the team had high expectations. By taking a fast, agile wide receiver in the first round, the hope was to give quarterback Daniel Jones a No. 1 target.

However, year one did not go so well.

Toney struggled to stay healthy during his rookie season and did not produce in the way that the team had hoped. He caught only four passes in the first three games, played in only 10 games total and made four starts. The former Florida Gator ended the year with 39 catches for 420 yards without a touchdown.

While it wasn’t an ideal beginning, Toney showed promise and caught 10 balls fro 189 yards in week 5 against the Cowboys and broke Odell Beckham Jr.’s Giants single-game receiving record. But then he was tossed for throwing a punch, so…

Despite the sluggish start to Toney’s NFL career, there is a lot of hope that he will turn the page in 2022. He will be the team’s highest-drafted receiver and has a lot of weight on his shoulders to produce in Year 2.

Everything is relying on that health factor. pic.twitter.com/bBJ0gLXKE3

As Giants wide receiver Kadarius Toney gears up for his second season in the league, he has been putting in a lot of work to get stronger, faster and twitchier.

He recently shared a video of what he has been doing to work on his change of direction and it’s rather unique. Toney is strapped into a resistance trainer and quickly flipping 90-degrees and stepping onto a platform. He looks explosive.

Should Toney stay healthy in 2022, he could be a real problem for opposing corners.