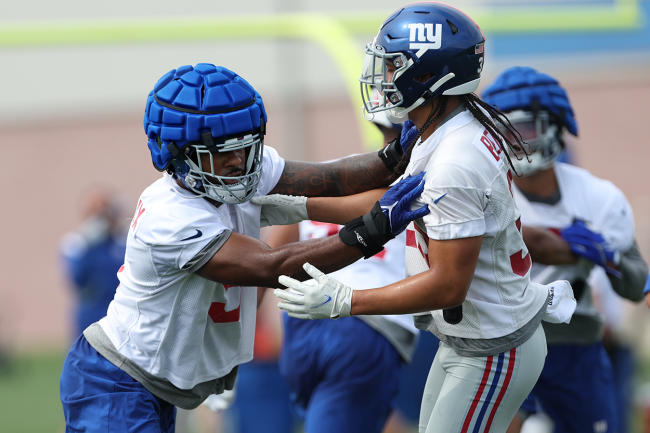 Training camp fights are not a good thing. But they aren’t necessarily a bad thing.

As NFL players get back onto the field, they have had a full offseason to get their minds right for the next season. Once they finally dig their cleats into the turf, they are ready to go and ready to ball. Sometimes, that results in flared tempers as the pent-up passion and emotion comes out all at once. So long as it blows over and the beef gets squashed, it’s a sign that the guys are chomping at the bit and ready to go all-out.

That was the case on Saturday morning at Giants camp in East Rutherford, New Jersey.

After the New York offense ran a quarterback sweep at the goal line, defensive tackle Dexter Lawrence buried right guard Mark Glowinski into the turf. Left guard Shane Lemieux did not like what he saw and immediately made his feelings clear.

Lemieux ran over to Lawrence and tacked him to the ground. Seeing his defensive line counterpart under Lemieux, defensive end Leonard Williams went to Lawrence’s defense and pinned Lemieux to the turf.

Shane Lemieux and Dexter Lawrence just got into it big time AND I LOVE IT pic.twitter.com/0cs4dBKRTt

Here’s another angle from a closer vantage point:

After the play ended and the fight was broken up, both sides separated and took a moment to cool down. As they did, Saquon Barkley went over and spoke with the defense.

Practice was able to continue, so it seems like things got cleared up. Either way, Lawrence, Lemieux, Glowinski and Williams need to squash their beef before they get back on the field next. It happens, and again, sometimes it’s a good thing. They’re ready to go and they’re excited to start hitting.