Giants WR Sterling Shepard Loses His Mind On The Sideline, Starts Punching Bench In A Fit Of Rage, Slams Trash Can 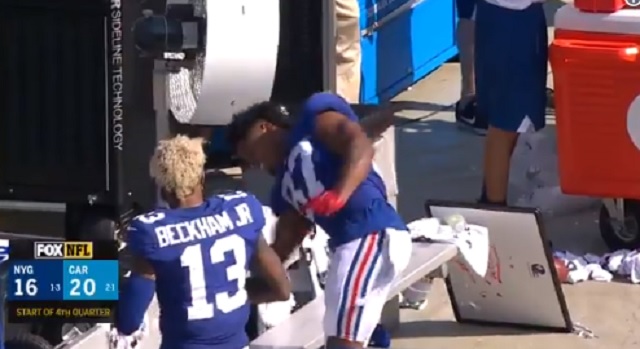 The NY Giants wide receivers appear to be turning on Eli Manning. Early this morning Odell Beckham Jr called out Manning for not finding him down the field enough during an interview with ESPN’s Josina Anderson.

It seems like Beckham isn’t the only one frustrated with the Giants offense. During today’s Panthers-Giants game, wide receiver Sterling Shepard lost his mind and started punching the bench in a fit of rage after an Eli Manning interception.

The Giants don't have a QB not named Odell.

Sterling Shepard feels the same way about Eli as I do

This man Eli even made Sterling Shepard Mad…. Wowwwwww

Bruh I feel so bad for OBJ, Sterling Shepard, Evan Engram and Barkley lol. Like you can’t make this shit up.