Gilbert Arenas Reveals The Exact Moment He Realized LeBron Is The G.O.A.T. 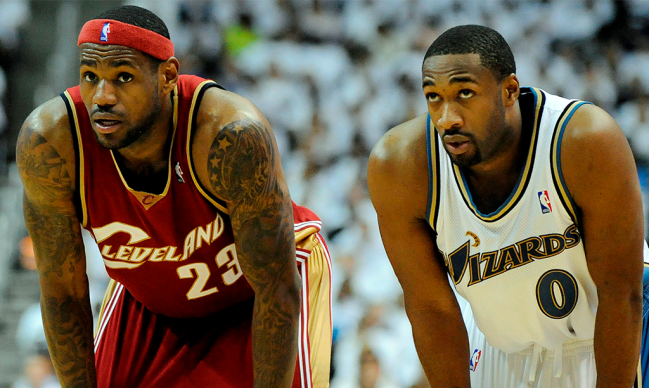 Over the course of his 11 seasons in the NBA, Gilbert Arenas earned a reputation for himself as a shooter in more ways than one. The man dubbed “Agent Zero” was never afraid to pull the trigger both on and off of the court, as Gilbert Arenas was one of those players who was able to constantly hit a clutch shot even when teams knew the ball was going to end up in his hands with a game on the line—as is the case with LeBron James.

You obviously need to have some talent to stick around in the NBA for over a decade, and while Arenas was certainly no slouch, there aren’t many people who’ve left a more indelible mark on the game of basketball than LeBron James has ever since he found himself thrust into the spotlight when he was still Just A Kid From Cleveland before being drafted by his hometown team straight out of high school and immediately taking the league by storm.

When you consider he’s won four championships, the same number of Most Valuable Player Awards, and earned a spot on the All-Star team in 16 of the 18 full seasons he’s been in the league, James doesn’t really have anything left to prove. However, there’s one title he’s is still fighting for at the age of 36: the greatest basketball player of all time.

I like to think there’s an alternate universe out there where James never existed and Stephen A. Smith spends his nights yelling into a webcam to make videos for his 372 YouTube followers instead of having millions of people watch him engage in the “LeBron vs. Jordan” argument on First Take for the 1,384th time—a topic every talking head on the planet seems to turn to whenever there’s a slow news day.

James is still cementing his legacy, but regardless of what he does over the rest of his career, it’s all but guaranteed that particular debate will continue to take place on ESPN and inside barbershops for decades to come. Almost everyone with an iota of basketball knowledge has chimed in on a question that doesn’t really have an objective answer, but with that said, there’s one person in particular who knows a thing or two about the game who’s shared why he thinks James has already earned the spot where the G.O.A.T. resides.

Gilbert Arenas recently joined Whistle’s Player’s Breakdown to share his thoughts on where LeBron measures up against fellow legends like Jordan and Kobe Bryant. Unlike the many analysts who’ve offered their opinions on this issue, the former player actually knows what it’s like to compete against James and shed some light on the night he realized that he was playing against the man he considers the best player in the history of the NBA.

During the discussion, Arenas recalled a series of events that unfolded in the closing minutes of a first-round playoff game between the Wizards and the Cavaliers in 2006 that made him realize everyone else on the court was just a pawn in The King’s game. After James signaled Cleveland’s coach to sub Zydrunas Ilgauskas out of the game, Washington tried to counter by replacing Brendan Haywood only to discover they’d fallen into a trap, as LeBron immediately went off after taking advantage of the defensive mismatch he was presented with.

As he explains in the video, Arenas realized James had spent the entire game serving as a “decoy” to draw attention away from his teammates while waiting for his moment to explode, claiming:

I’m sure this will end the debate once and for all.