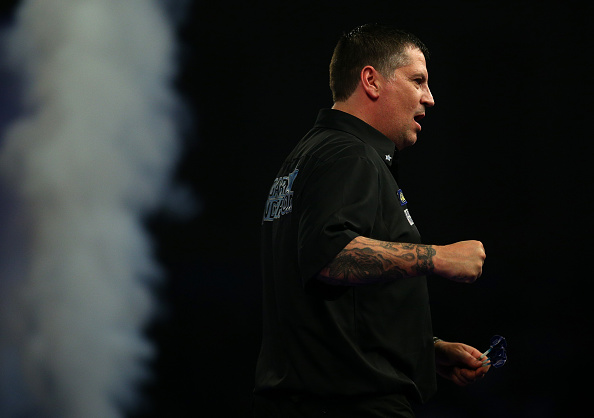 A major controversy over flatulence has gone to shit and become a stinky situation that has left a cloud over the competitive world of professional darts. In case you forgot to set your DVR to record the Grand Slam of Darts on Thursday, you missed a blowout as Scottish dart player Gary Anderson defeated Dutchman Wesley Harms 10-2 to advance to the quarterfinals. However, Harms was left with a bad taste in his mouth and nostrils after he lost to Anderson.

Harms knows that he stunk up the joint with his play, but says his shitty performance had a lot to do with the unfair playing conditions — specifically that Anderson farted and left the area smelling like the Staten Island dump on a sweltering hot summer day. A fuming Wesley claims that Anderson left a “fragrant smell” behind after throwing darts. The odor was so atrocious that it will “take [him] two nights to lose this smell from my nose.” But as we all know: He who smelt it dealt it.

Anderson, who is a two-time world champion, vehemently denies that he dropped any stink bombs and blamed Harms for the putrid smell. “I thought he had shit… I thought Wesley had farted on stage,” Anderson said during an interview. But as we all know: He who observed it served it. “It was eggs, rotten eggs.” This is why everyone needs a dog, so that when you bust ass you can blame it on your pooch.

“You can put your finger up my arse, there’ll be no smell there. I thought he had shit and I went ‘that’s dirty.’ It was bad,” the 47-year-old Anderson said. Easy Gary, nobody wants to give you a prostate exam to settle a debate on who farted. We’re not sure if Gary is pulling our legs or pulling our finger in his over-the-top rejection of the fart accusal of tainting the Grand Slam of Darts.

“If the boy thinks I’ve farted he’s 1010% wrong. I swear on my children’s lives that it was not my fault,” he said. That’s an extremely specific percentage. This all seems like way too much of an aggressive denial by Anderson and as we all know: He who denied it supplied it.

Anderson went way out of his way to defend himself that he didn’t fart and definitely dove straight into the TMI territory. “Usually if I fart on stage I shit myself. You know that because I’ve told you in a documentary. If I’d farted and it smelled like that I’d put my hands up and go ‘sorry, I need to get off.'” Gary’s overwhelming need to say that he didn’t release brown thunder during the match is a little suspicious and as we all know: He who rejected it respected it.

Anderson did actually admit to farting during a match and almost shitting himself at the 1:24-mark.

Gary Anderson and Wesley Harms have denied accusations of farting on stage at the Grand Slam of Darts last night.

However, your Honour, I'd like to draw your attention to 1:24 of this video. Anderson has previous. A serial farter, your Honour. pic.twitter.com/iK1RZsqR3t

Anderson AKA “The Flying Scotsman” was the last to speak of the noxious fumes and as we all know: He who spoke last set off the blast. Desperation is a stinky cologne. The Professional Darts Corporation (PDC) is hoping that the controversy blows over.

A special dedication to Gary Anderson and Wesley Harms.