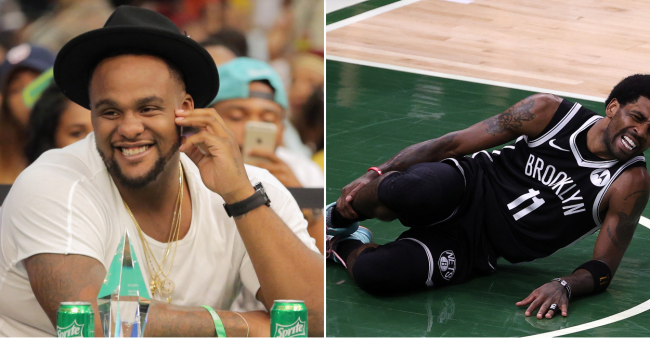 Two weeks ago, Davis was critical of Irving for stomping on the face of Lucky the Celtics logo after a Nets win.

On Sunday during game 4 of the Bucks-Nets series, Irving got injured after badly spraining his ankle when he fell awkwardly during a layup attempt.

Kyrie Irving goes down hard after the lay-up, grabs his right leg.

Hope it's nothing serious 🙏🏽pic.twitter.com/Nb47vIsIYb

Davis reacted by implying Irving received karma for stomping on the Celtics logo.

On Monday Davis doubled down and took more shots at Kyrie despite the fact that he received backlash from fans over his comments.

Glen Davis has a message for Kyrie Irving pic.twitter.com/dPYQe6D6GS

“Like, you know what I’m saying, for example, countries that have flags! You go and step on a logo flag, what is that?! That’s disrespect!”

“I played for the Celtics, I’m a Celtic forever!!! So, it don’t matter! It don’t f**king matter! Stop getting mad because your man got weak ankles!”