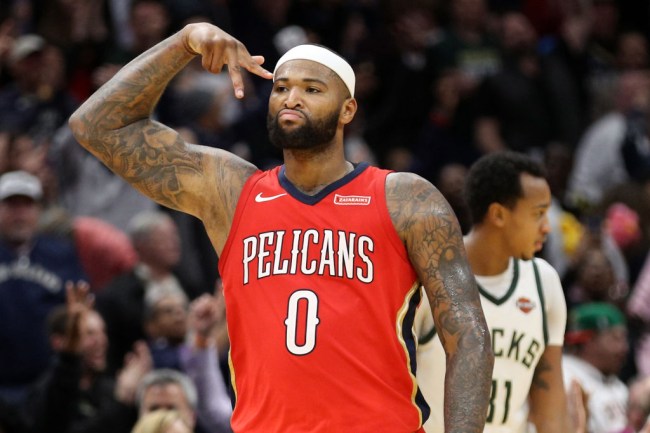 NEW ORLEANS, LA - DECEMBER 13: DeMarcus Cousins #0 of the New Orleans Pelicans reacts after a three point shot against the Milwaukee Bucks at Smoothie King Center on December 13, 2017 in New Orleans, Louisiana. NOTE TO USER: User expressly acknowledges and agrees that, by downloading and or using this photograph, User is consenting to the terms and conditions of the Getty Images License Agreement. (Photo by Chris Graythen/Getty Images)

Even though Cousins is coming off a serious achilles injury, the Internet was shocked by the move.

THE WARRIORS LITERALLY HAVE A 5 ALL-STAR STARTING LINEUP.

Why are we even bothering to follow this league anymore?

BREAKING: With the addition of DeMarcus Cousins, the Golden State Warriors sign Commissioner Adam Silver to a 3-year deal to ensure they win the next 3 titles. pic.twitter.com/zqzvYYRsuc

Me after seeing the Warriors signing DeMarcus Cousins… pic.twitter.com/X7HK1Gy6GX

The Warriors are literally an All-NBA Team starting lineup from 2015-16:

DeMarcus Cousins: "Really? No one is going to pay me my money? Fine, y'all ain't ever winning again." pic.twitter.com/Ukkeq5ecAN