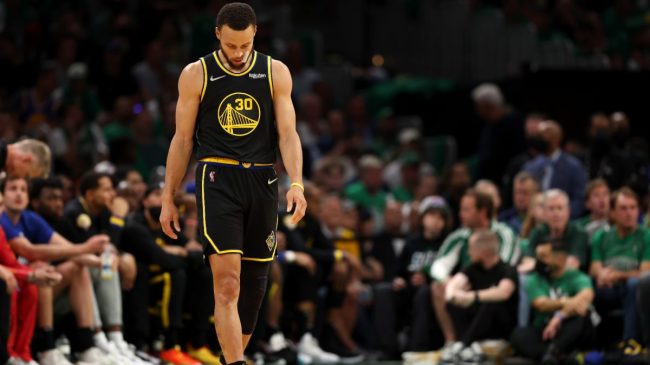 The Golden State Warriors fell in Game 3 by a score of 116-100, falling a game back in the NBA Finals series. After keeping the game close for the first three quarters, the Dubs crumbled late, scoring just 11 points over the last 12 minutes of action.

That miserable fourth quarter cost them a chance at victory, a storyline that’s becoming more prominent over the first three games.

In Golden State’s opening loss to the Celtics, the Warriors blew a 12-point fourth quarter lead to lose. They were outscored 40-16 in that final frame, resulting in a 12-point defeat.

The inability to close out games has cost Golden State thus far.

What’s been evident is the lack of help for superstar Steph Curry. Curry is averaging a series high 31.3 points a night on 48.5% shooting. He’s hitting nearly 50% of his three-point attempts. He’s been the best offensive threat on either side.

Just two Warriors scored more than 10 points in the Game 3 loss, with starters Draymond Green and Kevon Looney combining for just eight points. The bench wasn’t much better, scoring 18 points on the night.

The lack of another consistent playmaker is hurting Golden State’s chances of bringing home a title, at least according to one NBA analyst.

Jason Timpf appeared on the Colin Cowherd Show to discuss Game 3. What he says is that the Warriors need another playmaker to contend for a title.

“I would argue Golden State’s one guy short in this series against this Boston team.”

He’d go on to talk on the Warriors’ future, and what they may need to do in order to improve the roster.

“I’m a huge believer that it is incredibly difficult to win an NBA championship. And I’m a huge believer in pushing your chips into the middle. It’s better to get one than to flounder in mediocrity or get close a bunch of times and not actually get the deal done.

“Here’s the thing. You’ve got assets that are sitting on the bench in the NBA Finals. Jonathan Kuminga, Moses Moody, James Wiseman. Those guys are not helping you here… You’ve got these guys that are aging, and you’ve got these young guys that are simply not good enough or ready to play in this series, and there is a version of this story where you cashed in two or three of those guys… You get back a real horse and that might be the difference between you losing to Boston in six and you beating Boston in six.”

Timpf essentially believes, with Klay, Steph, and Draymond getting to the backsides of their careers, the Warriors’ best option may be to trade young talent to chase one more title before it’s too late.

They’ve not been able to overcome the lack of playmakers thus far. If they fall to Boston in the NBA Finals, the front office might want to think about Timpf’s suggestion.