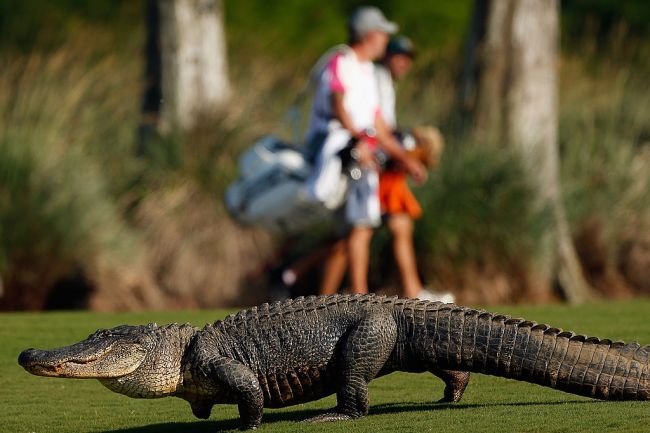 Forget the astronomical odds you have to beat in order to make a hole-in-one, there’s a new impossible feat on the golf course now thanks to a South Carolina man’s shot landing on the back of an alligator.

This is right up there with a golf shot hitting a bird, only this even seems a bit crazier given how rare it is to actually see an alligator out on the golf course. Plus, think about an alligator’s back, it’s not exactly the flattest or smoothest surface in the world. For a golf ball to stay put after rolling up its arm or literally hopping onto its back seems impossible.

David Ksieniewicz’s daughter, Kristine Robinson, shared photo evidence of the incident on Facebook and described it as the ‘shot of the day.’ That’s a stretch given the fact your pops very clearly either shanked his shot or air-mailed a green to hit this alligator, but sure, given the fact that the ball stayed on the alligator, I guess we can call it the shot of the day.

Kristine got technical with the rules of golf on her Facebook post as well explaining that her dad got free relief from the alligator’s back.

“Under rule 16.1, which addresses ‘abnormal course conditions,’ the player is ‘entitled to take relief with no penalty,’” Robinson wrote. “Which is good, because we determined that my dad David Ksieniewicz should PROBABLY consider this dangerously shanked shot UNPLAYABLE & start over.”

We’ve clearly got some pretty serious golfers here quoting straight from the USGA Rules of Golf after witnessing the impossible happen. I wonder if Kristine posted the photo and rule in spite, maybe she and her father had big money on the line, her dad shanked a shot, and she actually wanted him to suffer a penalty. Kristine also wrote UNPLAYABLE in all caps, maybe she really was fuming about the situation.

Nevertheless, congrats on the father-daughter day of a lifetime, Kristine and David.