Bros Ride Their Bikes 800 Miles In From Oregon To Cali, Playing 17 Golf Courses Along The Way 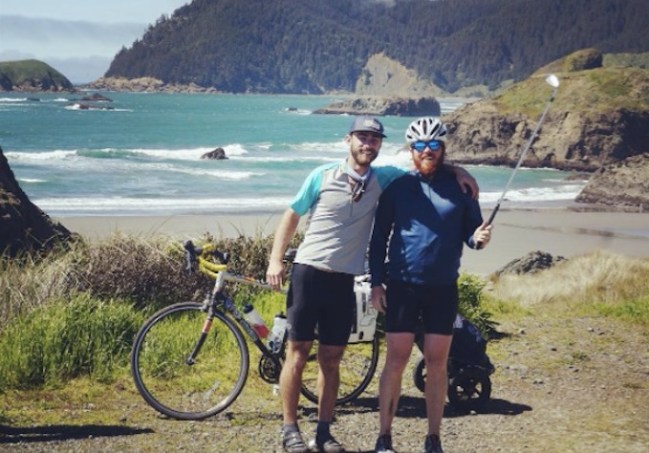 Often times when you see a story of someone taking the ‘trip of a lifetime’ or a ‘bucket list trip’ these adventures span months. You see these stories and wonder just how in the heck that person can afford to take so much time away from the real world. The thing I love the most about this story is it only took these bros 2.5 weeks to ride their bicycles 800+ miles from southern Oregon to California while stopping to play 17 of the country’s best golf courses along the way.

It certainly wasn’t easy. Lugging 80 pounds of gear on their backs as they averaged 70+ miles on the road each day between rounds of golf, but Pete Phipps and Luke Davis pulled off the golfing trip of a lifetime.

The two spoke with Josh Sens at Golf.com about their trip that has golf enthusiasts worldwide seething with jealousy.

The discussed the route they took, a trip they dubbed ‘Portland to Pebble’. Along the way, they hit three public courses in Northern California designed by Alister Mackenzie. If that name rings a bell it’s because he is the architect of Augusta National, home of The Masters. Alister also designed the world famous Cypress Point.

While breezing through Northern California these bros played Northwood in Sonoma County, Sharp Park just south of San Francisco, and Pasatiempo in the mountains surrounding Santa Cruz. The latter was a course so beloved by Alister Mackenzie that he reportedly kept a house on the 6th hole.

You can check out footage from the trip on LieAndLoft.com, the website created by Pete Phipps and Luke Davis which they used to catalog their adventure. They also have some badass drone footage of the trip:

The 800+ mile golfing bike adventure concluded in Monterey, California, home of the fabled Pebble Beach. However, the two opted to play ‘the poor man’s Pebble Beach’ in place of forking over the $495/round green’s fees for Pebble Beach. Instead, they played Pacific Grove (Golf Links) which also runs along the Pacific Coast and has a Links-style feel to the course.

You can read about the adventure these bros had over on Golf.com, and you can purchase some epic prints of the golf courses they played on their website LieAndLoft.com.