A ‘Pro’ Golfer Shot 127 In U.S. Open Qualifier And I Don’t Know How The That Even Happens 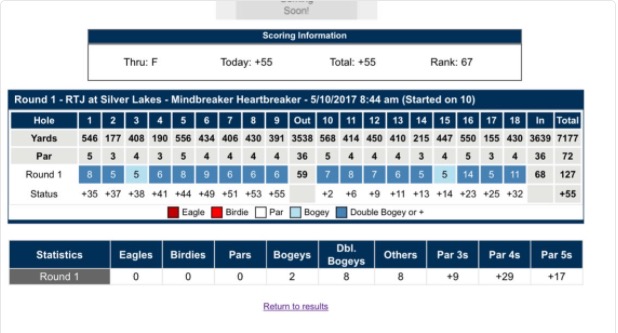 Shitting on people for playing poor golf is not my style. Every round can either be great, mediocre, or pure fucking shit. I have personally shot in the 70s, 80s, and 90s in the last year. And although the latter is usually not the case, when things go sideways, sometime they just keep on going.

That said, I don’t think I have ever even sniffed a score over 110 since I was like 10 years old. So I don’t know how this guy –his name Clifton McDonald — trying to qualify for a U.S. Open shot 127. That is beyond outrageous. To even enter to qualify a player is supposed to have a handicap under 3 or be declared as a professional. That means you shoot 85 on a really bad day and a 95 on the worst day of your life. That doesn’t mean you toss up a 55-over par day.

Look at this scorecard, which was tweeted by his playing partner Lee McCoy. For all you non-golf fans, McCoy is a legit professional golfer.

So how did Clifton McDonald, who is clearly not a 2.4 handicap, get in this qualifier?  Well, there is a loophole. If you declare yourself as a professional, you don’t need a handicap. You can just sign up and every assumes you are a professional. That is exactly what McDonald did, because his life motto is obviously “fake it till you make it.” Or at least until you embarrass yourself so badly that you have to go into hiding for a few months.

It is worth noting, that another “pro” who wasn’t declared on the scoreboard as an amateur shot 107. That is still 20 shots better than McDonald.

One final note, I would die to see the shot tracker of this round. Or maybe just holes 16 and 18 where he carded a 14 and an 11 respectively.