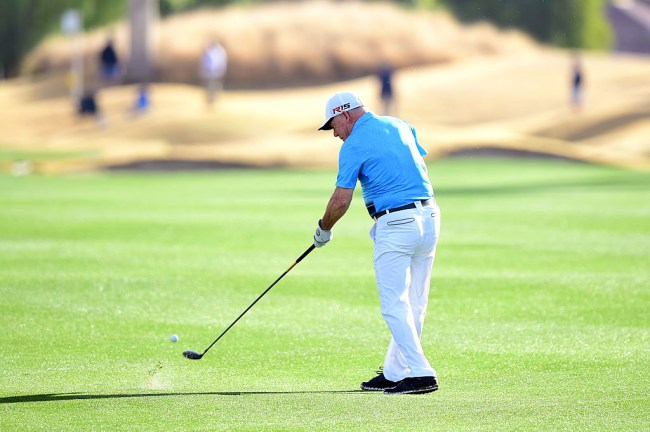 Let me introduce you to Laurent Hurtubise. He is a left-handed golfer that was born with just his left arm. His right arm ends just below his elbow, but this didn’t keep him from hitting the shot of the day during the pro-am at this week’s American Express in Coachella’s Valley.

Playing alongside fellow lefty Greg Chalmers and three-time PGA Tour winner Troy Merritt during Thursday’s first round, the group made its way to the 151-yard fourth hole and Hurtubise jarred it for an ace.

The video shows a special moment, one in which Merritt may actually be more excited and amped after the shot than Hurtubise himself.

Laurent Hurtubise was born with one arm and started playing golf at age 11.

“That was the coolest experience I’ve had on the golf course,” Merritt said.

“It landed around the front of the green and we were all watching it closely as it tracked toward the hole and then bang, it disappeared. We all went up in celebration and Laurent went ballistic and maybe let out a few choice words, but who could blame him? It was an incredible shot,” Chalmers told the PGA Tour.

Hurtubise said that he played hockey and baseball growing up as a kid, but fell in love with the game of golf at 11-years-old. According to the Tour, he pokes drivers 230 yards off the tee with his full, one-handed lefty swing.

“As a kid, sports was a way for me to prove that even though I had a difference that I could perform as well as normal people … as they call them,” Hurtubise told the Desert Sun.

“People have differences and handicaps and whatever, but it was my way to prove that I could be as good as everybody else.”

Hurtubise and his professional partners finished the first round at 5-under and are T-74 headed into Friday’s action.