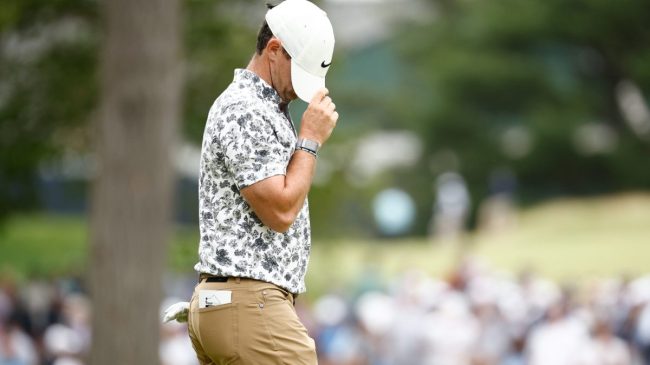 Safe to say The Country Club can be one of the more difficult courses on the PGA Tour. This weekend’s US Open is seeing thick roughs, tiny greens, and a hilly landscape in Massachusetts, making things very hard on the golfers.

It brings a unique sense of history, being one of the five charter clubs that founded the USGA. It’s a perfect host site for one of golf’s major tournaments, though some of the participants in this year’s field may disagree.

In fact, many have been seen looking far less than professional, with struggles causing frustrations and meltdowns over the opening round of play.

Through the first day, Canadian Adam Hadwin sits atop the leaderboards at -4, with a number of competitors sitting just a stroke or two off the pace.

Though there’s been only one round played thus far, a number of videos have popped up on social media showing stars like Rory McIlroy struggling with the course’s interesting layout.

Rory McIlroy, one of the sport’s top players, was seen slamming his club into the sand after going bunker to bunker on the 13th hole.

Rory McIlroy is exactly like all of us!! pic.twitter.com/ON32KLRdWN

Rory McIlroy made PAR after this:#USOpen

Somehow, he was able to save par. He’d go on a hot streak, birdieing two of the final three holes to finish near the top of the leaderboard.

He wasn’t the only one having trouble, though.

Adam Scott, who finished -1, hit quite possibly the longest three-yard shot in PGA history at the seventh hole of The Country Club.

The Country Club is no joke 😳 pic.twitter.com/v1DZX6e8lI

After whacking a 60-yard chip to the front of the green, Scott’s ball rolls nearly back to its original resting place.

For the golfers, it’s certainly been frustrating at times during this US Open. But for viewers, it makes the pros look more relatable as they struggle through the same mistakes that your average golfer might see.