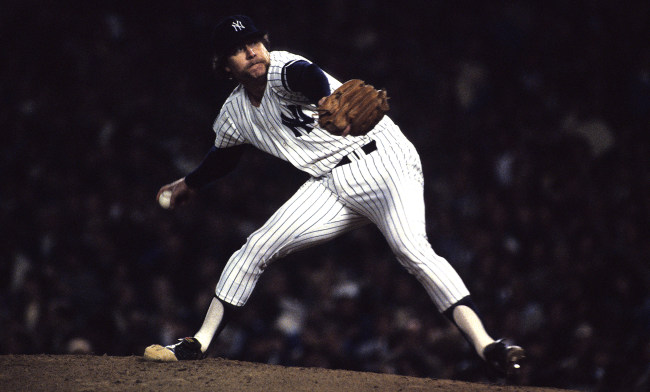 Rich “Goose” Gossage is about as old school as someone can get when it comes to the game of baseball these days.

He played back when closers, or firemen as they were then called, came into the game when a team was in a tight spot, regardless of what inning it was. They also stayed in the game and finished it out, even if it meant going three, four, or five innings.

And he is not happy with the current state of Major League Baseball, especially its commissioner Rob Manfred and New York Yankees general manager Brian Cashman.

Gossage went off on those subjects and more in a new interview published on Tuesday by USA Today.

“People ask me all of the time what I’m doing these days and I tell them, ‘Nothing but burning bridges,'” Gossage said.

Goose also has no love for Cashman, saying, “I was going to pick him up one day in the clubhouse, and throw him head-first in a trash can. All you would have seen is his feet. And there’s nothing he could have done about it.”

Goose Gossage basically has a problem with everyone in MLB

He wasn’t done there though. Gossage also isn’t happy with players like David Ortiz getting into the Hall of Fame.

“These guys have already been rewarded monetarily. They’re laughing all of the way to the bank on something that enhanced their performance. Come on, you don’t break the greatest record of all time (Hank Aaron’s 755 home run record) having the best years of your career when you’re in your 40s,” he said, referring to those who have been accused of or admitted to using PEDs. “They’re all phonies to me.”

“It breaks my heart to see what has happened to this game,” Gossage added, referring to what he calls MLB management “puppets,” coaches who are “glorified babysitters,” and players who don’t even know the fundamentals of the game. “They tore my heart out and cut it up… They ruined the game. I can’t even watch a baseball game.”

One thing is for certain, Goose Gossage wasn’t lying when he said he was “burning bridges.”

Baseball fans, as they always do, had thoughts.

Goose also feels he was just and right when he nearly killed Ron Cey by throwing 100mph and hitting him in the head. pic.twitter.com/hSH1wj0HLu

All of a sudden, I became a huge Goose Gossage fan! Go Goose!

Goose hates everything.. he's gonna be right a couple times

Everybody wants to punch Rob Manfred in the face

You’re giving this known tool a national platform again? Why?