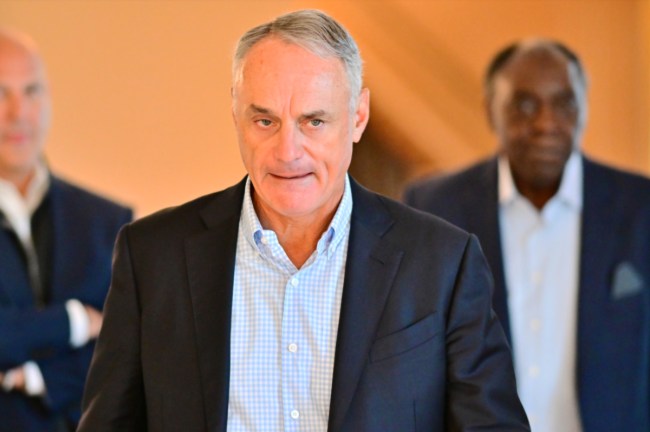 Rob Manfred is widely viewed, rightly so, as the worst commissioner in all of professional sports.

He has repeatedly proven since taking over as Major League Baseball’s commissioner in 2015 that he doesn’t have the first clue how to manage and grow the sport while also making current fans happy.

And that was before he addressed the media on Thursday to discuss the current (terrible) state of negotiations with players during the current lockout.

Is this too going to have ridiculous region restrictions so only a few markets can watch? https://t.co/Bp8ACIlpNf

After his press conference at the MLB owners’ meetings, Rob Manfred was, as usual, absolutely excoriated by baseball fans for his complete cluelessness when it comes to running the league.

“The status of spring training is no change right now,” Manfred told the media. “We’re going to have a conversation with the MLBPA about the calendar because we understand where the calendar is, but until we have that conversation and until we see how this session on Saturday goes, it’s no change.”

does he know spring training is in like 5 minutes

And that’s it. They have killed baseball.
MLB does not care about its most loyal fans.

This is terrible. Removes one of the cool strategic management components of a game.

Might as well just delete the Manager position in baseball now.

nice to know that the whole "baseball games are too long" thing was all a ruse, because al games are much longer than nl games, thanks to the dh.

Why not just go with 4 DH's so we can have all offense all the time.

Manfred also told the assembled media on Thursday, “If I hadn’t given consideration to what it would mean to miss games, I wouldn’t be doing my job. Obviously I pay attention to that. I see missing games as a disastrous outcome for this industry. We’re committed to make an agreement in an effort to avoid that.”

On the plus side, Manfred also added, “I’m an optimist, and I believe we will have an agreement in time to play our regular-season schedule.”

Whatever the f–k that’s worth.

Remember this quote from Rob Manfred:'

"I consider missing games as a disastrous outcome for this industry."