Why Did MLB Reportedly Tell Writers Not To Use Players’ Names Or Cover Them On Social Media? 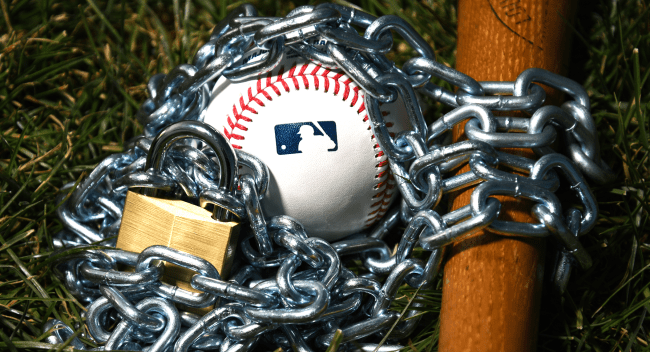 When Major League Baseball officially implemented a lockout of the players last week, it made its position very clear by removing every photo of a current player from its website MLB.com.

With no collective bargaining agreement in place, there would be no more promotion of the game’s stars – not even a photo.

All stories that discussed current players were also removed from MLB.com and replaced with archival content.

Promotional schedules were also altered to remove any mention of a player, such as in St. Louis where April 30 was renamed “Cardinals Third Baseman Bobblehead Day.”

We acquired outfielder Richie Ashburn #OTD in 1961. Ashburn would go on to become the franchise’s first ever representative on the National League’s All-Star team. pic.twitter.com/Y9jfxFMvwq

The Athletic reported on Tuesday that writers who work for MLB.com were also instructed to write no stories that mention a player by name and to not cover anything related to a Major League Baseball player on social media.

Why is MLB taking such extreme action against its stars?

According to Stephen J. Nesbitt, Mike Vorkunov and Evan Drellich of The Athletic, “exactly why MLB is taking this route isn’t clear.”

MLB commissioner Rob Manfred said in a press conference last week that it was a legal issue.

A commissioner’s office spokesperson told The Athletic writers, “Every action we are taking is at the advice of legal counsel per the National Labor Relations Act.”

When other experts in this field were asked if that understood the reasoning behind these moves by Major League Baseball, they didn’t.

Bruce Meyer, the lead negotiator for the players’ union, said he had no idea.

Dave Leach, a professor at Brooklyn Law School and a former regional director for the National Labor Relations Board, said he couldn’t think of any legal theory for why the league is making these moves.

“I’ve never seen a case which had similar facts. And I was there for 45 years, so I saw a good number of cases at the board,” he said.

Jason Wojciechowski, a lawyer at Bush Gottlieb and former editor at Baseball Prospectus, told them, “It’s a little bit of a mystery why they think this is somehow required legally. I don’t know what aspect of the law they think they’d be in violation of. As a union lawyer, my suspicion is that’s cover. But on the other hand, cover for what?”

Nathaniel Grow, a professor of business law and ethics at Indiana University who writes for FanGraphs, said, “How much pressure does it really apply? Is it more of just an aggravating tactic? Are the players going to cave on a second-year arbitration (demand) because their pictures are down from the website? Probably not.”

An MLB spokesperson told The Athletic, “These actions are not intended to punish players in any manner whatsoever.”

Despite stories like “When the Braves became the Bees” and “Fernandomania still resonates decades later” being the main content now on MLB.com, it certainly hasn’t stopped the league from profiting off of the names of the players whose faces have been removed from MLB.com.

Major League Baseball is notorious for shooting itself in the foot when it comes to public relations and promoting the game. This just appears to be one more in a long list of missteps taken by Manfred and company.

“…it seems to be such a foolish strategy,” Daniel Gilbert, a labor and history professor at the University of Illinois, told The Athletic. “By scrubbing the images from the website, they’re making one of the union’s fundamental arguments for them. I think the union is on solid ground by arguing that you can’t have something called Major League Baseball without the players who make it happen. You don’t have the Angels without (Shohei) Ohtani and (Mike) Trout. You don’t have the Dodgers without Mookie (Betts) and (Walker) Buehler. You don’t have the Yankees without (Aaron) Judge and (Giancarlo) Stanton.”

That’s not even the worst of Major League Baseball’s reported lockout shenanigans with regard to the players.

For MLB.com reporters, the new content limitations were explained last month in staff meetings. Multiple MLB.com employees said they were told they could only mention a player’s name in an article if absolutely necessary, and that player could not be the focus of the story. Any reference to a player must be approved by editors. Reporters were encouraged to write evergreen stories — about former players, non-40-man prospects, coaches, Hall of Fame candidates and history — instead of forward-looking angles about the upcoming season.

MLB.com reporters initially were instructed to maintain a low profile on social media during the lockout, according to sources, but hours before the CBA expiration that directive changed: Writers are to avoid posting about baseball on social media until further notice. (That restriction was eased the following day, yet reporters were asked not to mention 40-man players or comment on the labor situation.)

Baseball writers being told to not write about baseball might just be the most Major League Baseball thing yet.