Fans Already Are Feeling Ripped Off By MLB And Its Shortened 60 Game Season, And Rightfully So 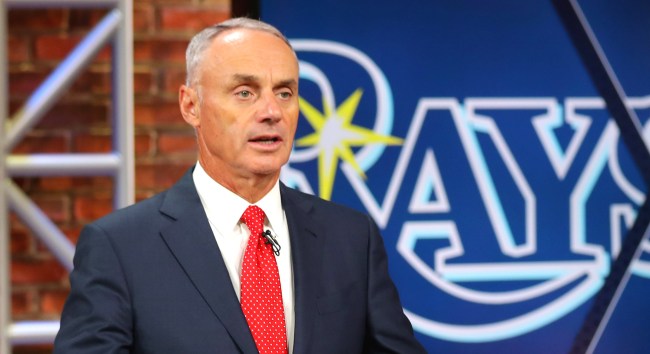 If Major League Baseball commissioner was an elected position, as chosen by the fans (and many players) Rob Manfred would be getting voted out of office come November.

His latest missteps have, once again, you guessed it, made baseball fans angry.

Considering the acrimony and back and forth public negotiations that ended up resulting in a shortened 60-game MLB season, one might think the league would be doing all it can to make fans happy. You know, like a good business would try to do.

Instead, for fans that would like to follow the shortened season on TV, rather than paying the usual $121.99 for the 162-game season on MLB.tv, with access to every team, Major League Baseball has decided, in its infinite wisdom, to charge $59.99 for the 60-game season.

Let’s do some math here. Fans are getting a shortened, oddball season and instead of paying $0.75 per game, they are being asked to shell out $0.99 per game. That makes sense.

The second reason fans are upset with MLB is the fact that, of the 60 games each team will be playing in 2020, most of them, despite a huge number of its fans still working from home, will be played at night – with no fans – except in Texas where the cheating Astros will get an unfair home field advantage.

Had Major League Baseball held many of its games during the day, when kids could watch them (and actually see them end), and parents working from home could have something different and exciting on the tube to to help pass the day, MLB choose to NOT take advantage of a bad situation. Shocking.

Out of all the ideas that MLB has ever had, starting no games before 4:10 in this day and age—where people are at home more than ever—is.....certainly one of them. https://t.co/lpn5jp6Z5M

Night games during the week and day games only on weekends. MLB. Just. Doesn't. Get. It.

No camps and no movies or games to attend.

Perfect chance for baseball to grab family viewers with a nice 6pm start.

So to recap, in addition to all of that, here’s how Manfred has done since the 2019 MLB season ended…

• After saying the Astros could be hit with an unprecedented punishment, Houston didn’t have a single player who participated in the biggest baseball scandal since the Black Sox receive a fine, suspension, nothing.

• Manfred said the best way to keep the Rays in Tampa is for them to play part-time in Montreal.

• He made players angry by leaking to the media a possible playoff format proposal that was completely absurd.

• Manfred basically passed the buck to Astros owner Jim Crane and the fans to dole out a proper punishment for cheating.

• He called the World Series trophy “a piece of metal” in trying to defend his decision to not punish a single Hosuton Astros player for cheating their way to a championship in 2017.

• The MLBPA says he lied about having to give Astros’ players’ immunity from punishment as another explanation for why they weren’t punished.

• The biggest free agent signee of the 2019-2020 MLB offseason, Gerrit Cole going to the Yankees, did not have his spring training debut with his new team broadcast on TV.

• Manfred failed once again to properly address a team cheating its way to a World Series title when he gave the Red Sox a slap on the wrist.

• One week after saying he was 100 percent sure there would be a MLB season, Manfred announced that he was “not confident” that a season would take place.

• Then, once the season was confirmed to actually be happening, MLB put out a set of altered rules in which all of them will be repeatedly violated because they’re so dumb.