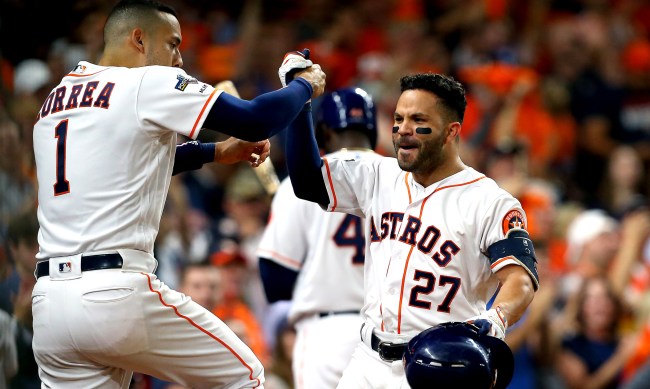 Thursday we reported that the Texas governor has approved professional and collegiate stadiums in the state to operate at 50% capacity, effective immediately.

“Stadiums, whether it be where the Mavericks play or the Texas Rangers play or the Dallas Cowboys play, will be able to seat [at] 50% capacity,” Abbott told KDFW-TV in Dallas.

Notice how he didn’t mention all of the professional sports teams in the state. I’m sure it was no intentional, but not mentioning the Houston Astros certainly could have been by design.

Why do I say that? Because playing your home games with fans in the stadium, even half-filled, is a significant advantage over other Major Lague Baseball teams who be forced to play with no one in attendance at their home games.

Thursday afternoon, the Dallas Morning News reported, in true MLB clusterf**k fashion, is leaning towards allowing this to happen.

According to two major league sources Thursday, MLB is inclined to allow local and municipal governance to take precedence when it comes to allowing fan attendance at games.

Fairly significant: Sources indicate MLB is inclined to allow Texas-based teams to play with fans in stands, regardless of whether fans can attend in other markets. Talk about your home-state advantages. https://t.co/lVqcGDbPsf

Texas is the only state to have opened to pro sports with fans, though some other states have indicated they would consider adjusting their stances as they meet various thresholds in containing the coronavirus outbreak. Texas is home to two MLB teams, the Rangers and Houston Astros.

Oh yeah… letting the Astros (and the Rangers, who are set to open their brand new $1.2 billion stadium) play their home games with 15 to 20,000 fans in attendance will also give those teams another huge advantage: MONEY.

And once again, Major League Baseball, should the rumors end up being true, will have screwed the pooch when it comes to trying to properly market itself.

But how will the @Astros hear the trash can bangs

Did you see Astros will have Fans or CANS in the stadium?

So fans WILL be able to boo the Astros in person.