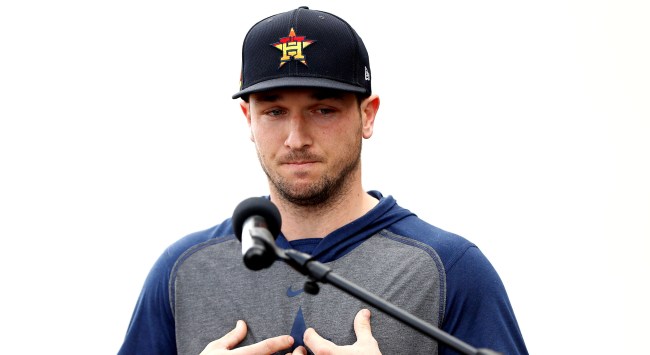 THe Houston Astros may have caught a break when it comes to having to deal with the team cheating its way to the 2017 World Series championship by illegally stealing signs thanks to the pandemic and the ensuing MLB shutdown, but don’t think for a second that baseball fans all across America have forgotten what they did, and how they acted after they got caught.

Not by a long shot.

This was never more evident than a couple of days ago when Departed Soles Brewing Company in New Jersey announced that they have created a fanastic new craft beer called Trash Can Banger IPA that sells for, wait for it, $17 for a four-pack. Get it? $17… 2017. There you go.

On top of that, just to show a level of pettiness that everyone would be proud to achieve, Departed Soles also made the Trash Can Banger IPA using 2017 grams per barrel of Galaxy and Strata Hops.

Really, from the can design to the entire description of the Trash Can Banger IPA that they shared on social media, this creation deserves some kind of special award or commendation.

“Some of you may have already gotten the Signs that this was coming today, but beer releases are like a pitcher’s arsenal, and you never really know what’s coming and when… unless, of course, you cheat,” Departed Soles Brewing Company wrote.

“When this pandemic first struck, much of our staff worked from home, while Brian rededicated himself to the Art of Brewing.. rewatching brewing school classes, reading new studies, and pouring over interviews, trying to Luhn(h)ow we could improve our efficiencies and processes. The result is a Fiers new approach to everything we do, from mashing in, to dry hopping, water treatments to canning, and everything in between.

“And, well, we don’t mean to breg, man, but this new beer is Reddickulous, and you won’t want to miss it!

“Brewed with Citra in our whirlpool, and given a touch of milk sugar for complexity, this juice bomb was twice dry hopped… first with more Citra, then with 2017 grams per barrel of Galaxy and Strata Hops… and just like an Asteroid, the flavor is out of this world! Like a craft beer Minute Made orange juice, to enjoy at a Park this fine day!

“Need some #TrashCanBanger in your life? Maybe Collin a favor with a friend if you’re stuck in Correa, to have ’em pick you up some, or Cora ride share from Dallas to the brewery. If all else fails, throw a Belt & ran to the brewery, with a little Springer in your step, to be here at noon when we open up and release it to the world… Assuming our canning run goes off without a Hinch, 4 packs of this new #DefinitelyNotGlutenFree Banger will be available at noon for $17. Set your alarm to buzz, or tape an electrode to your chest to make sure you don’t forget!

“The show Musgrove on!”

This needs to be sold at every road Astros game