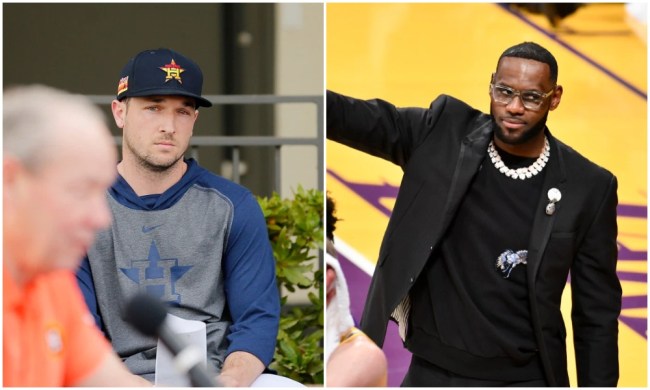 Remember when the Astros cheating scandal dominated the sports scene? With The Big Cancel quite literally taking over the planet you may have forgotten about the fact that the Astros did indeed steal signs during their 2017 World Series-winning season and during the 2018 campaign as well.

Last week, LeBron James and Maverick Carter’s Uninterrupted sports media company announced plans to produce a documentary series about the Astros sign-stealing scandal set to air on streaming service Quibi and Alex Bregman isn’t too happy about it, which is understandable given the situation.

It turns out that Bregman and James shared sports agency ties with Klutch Sports. Following the news of James’ documentary that will do nothing but shine a horrible light on the Astros, Bregman has reportedly decided to part ways with the agency.

The Athletic reported late Tuesday night that Bregman “felt angry and betrayed” that his now former agent, Brodie Scoffield, would allow a company with ties to James to cash in on that particular topic.

It’s not too often you hear about this sort of crossover in sports when it comes to agents, but this is certainly a unique situation.

The docuseries, set to be titled Sign Language, will also be produced by The Cinemart, the company behind the Hulu documentary Fyre Fraud about the scam that was Fyre Festival in the Bahamas.

“The documentary will transcend the baseball diamond to explore larger themes of greed, cheating, corruption, sportsmanship and social media activism,” Quibi stated in a press release.

There hasn’t yet been an in-depth series on Houston’s cheating scandal and it’s safe to assume that Sign Language will be a huge hit upon its release.