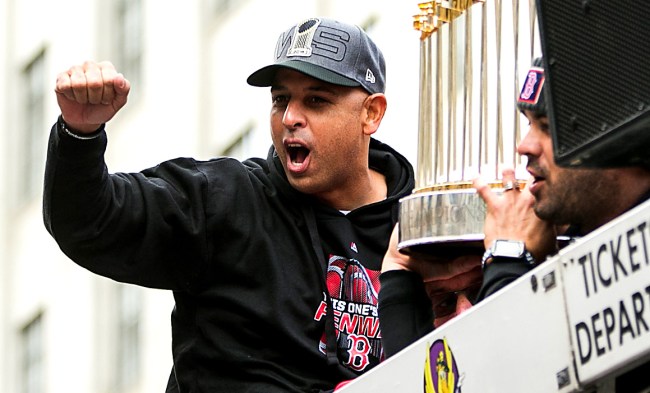 Major League Baseball and its jellyfish of a commissioner Rob Manfred announced on Wednesday what the punishment will be for the Boston Red Sox illegally stealing signs during their run to the 2018 World Series title.

According to Ken Rosenthal and Evan Drellich of The Athletic, the Red Sox will lose a 2020 second-round draft pick, the team’s replay operator J.T. Watkins is banned from MLB through the 2020 playoffs and from doing same job during the 2021 season, and Red Sox manager Alex Cora is suspended through the 2020 MLB playoffs… but NOT for cheating during the Red Sox 2018 championship season, instead he’s suspended for his part in the 2017 Astros’ tainted championship season.

Here’s some more B.S. from those involved in this ridiculous decision.

Statement from the Boston #RedSox and Alex Cora: pic.twitter.com/qXsUhSobSy

If Cora is being disciplined for cheating while with the Astros why wasn’t he suspended way back in January with Houston’s manager and former general manager?

Following a January report from The Athletic on the Red Sox’s conduct, Commissioner Rob Manfred found that Watkins, on at least some occasions during the 2018 regular season, illegally utilized game feeds in the replay room to help players during games — an undertaking less egregious than the Astros’ famed 2017 sign-stealing scheme.

The league did not find that Boston’s impermissible conduct continued during the 2018 postseason or 2019 regular season.

“I do not find that then-Manager Alex Cora, the Red Sox coaching staff, the Red Sox front office, or most of the players on the 2018 Red Sox knew or should have known that Watkins was utilizing in-game video to update the information that he had learned from his pregame analysis,” Manfred wrote in his report. “Communication of these violations was episodic and isolated to Watkins and a limited number of Red Sox players only.”

Wow. As I have said before, even if Manfred thinks he would lose any litigation because of the MLBPA’s contract, if he would have at least made an attempt to punish some players fans might not want his head on a platter right about now.