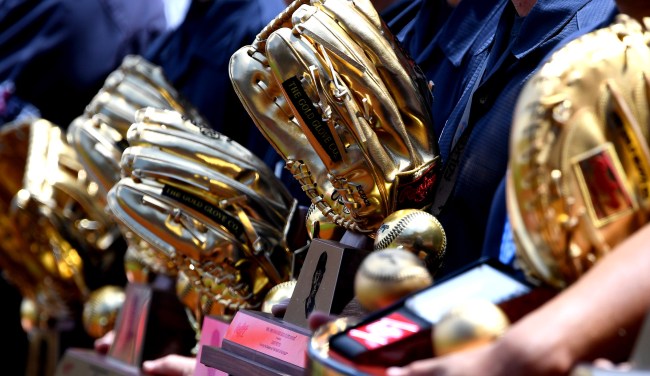 First of all, let me just say Major League Baseball’s Gold Glove Awards Show is never going to draw huge ratings. I get that. BUT… if you are a sport that is sssssstrrrrruggling to get any kind of foothold with fans, like Major League Baseball most certainly is, why would you hold an awards show, highlighting some of the incredible talent your league possesses, on a night when everyone is watching election coverage and absolutely NO ONE is going to watch your show?

Oh. Right. Because you’re Major League Baseball and your league is run by a buffoon. Silly me. I forgot for a second.

I forgot that Major League Baseball is run by a guy who didn’t have the stones to even attempt to punish players guilty of cheating their way to World Series wins.

I also forgot that this is the same league that didn’t think putting the debut of the biggest free agent signing of 2020, Gerrit Cole, to the biggest media market team, the New York Yankees, was worth putting on television, even though the league has ITS VERY OWN NETWORK.

So, airing the MLB Gold Glove Awards Show during the coverage one of the most contentious elections in the history of our country (which MLB knew was going to be the case months and months ago), absolutely fits right in with everything else the league does.

Eh, who needs fans, am I right?

MLB: We have a real problem marketing our game.

Executive: Well, how do we fix it?

MLB: We can start by announcing the Gold Glove awards during the most important presidential election of this generation.

Executive: I love it. Let's do it.

Why on earth would MLB do the Gold Glove award show tonight? That sport just hates itself so much

Baseball handing out Gold Gloves tonight has got to be among the Top 5 Most Tone-Deaf PR moves ever by a pro sports league but congrats to Javy Baez, Anthony Rizzo and Luis Robert, among the other positional winners. Couldn’t one of the three Chicago catchers nominated have won?

How dumb is MLB and Rawlings to be announcing Gold Glove winners tonight like right now. Get a clue. You can do that just about any other night of your lives. Did you forget what was going on?

The MLB announcing gold glove winners right now is the most MLB thing in history.

MLB: why don’t people care about our game?

Yo @MLB this is a terrible time to announce the Gold Glove Award winners. Why the hell not wait until tomorrow?

By the way, here’s who won, because I know you weren’t watching.