Pirates, Orioles Played In Empty Stadiums And Major League Baseball Should Be Embarrassed 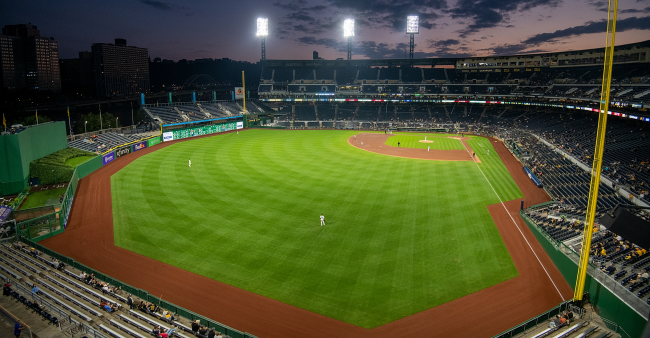 Just a few weeks after the Tampa Bay Rays set a new all-time low attendance record, the Pittsburgh Pirates and Baltimore Orioles played in almost empty stadiums Wednesday night as neither appeared to have more than 1,000 fans in the stands.

The photo above shows what the stands, which seats 38,362 fans, looked like during the fifth inning of Wednesday night’s game at PNC Park in Pittsburgh.

Announced attendance at the park for the Pirates’ game against the Detroit Tigers was 8,382. There was maybe one-tenth of that number of fans actually sitting in the seats.

Over in Baltimore for the Orioles’ game versus the Kansas City Royals, another empty stadium, Camden Yards (seating capacity 45,971), looked like a mausoleum with an “announced” attendance on Wednesday night of 4,965. Again, that number wasn’t close to how many fans were actually at the game.

Obviously, the number one reason why both of these Major League Baseball games had such low turnouts is because the four teams involved have a combined record of 223-335, a 40% winning percentage (Pirates: 50-90, Tigers: 66-75, Orioles: 45-93, Royals: 62-77), but how does one explain the Rays, with the second best record in Major League Baseball at 88-52 and leading the American League East being 28th in attendance in 2021?

Still, there are players that fans should be glad to watch on all of those teams, including Bryan Reynolds, Ke’Bryan Hayes, Miguel Cabrera, Jonathan Schoop, Cedric Mullins, Ryan Mountcastle, Salvador Perez, and Whit Merrifield, just to name a few.

Only the Toronto Blue Jays, who played 38 games at their spring training park in Florida and several more at Sahlen Field in Buffalo, and the Minor League team masquerading as a Major League squad Miami Marlins have done worse.

Related: Derek Jeter Announces Capacity At Marlins Games Will Be Reduced And The Internet Had Jokes

As one baseball fan recently told me while they were at Tropicana Field in St. Petersburg for a Rays game, “It’s crazy how few fans are here. It’s so quiet. So unnerving compared to games at other ballparks.”

Pittsburgh is supposedly averaging 10,355 fans per game, and it’s not like anyone is going to see the Tigers (13,267 average) and Royals (14,313) even when they are at home, but when Minor League Baseball teams are setting attendance records in the same year there’s a real problem.