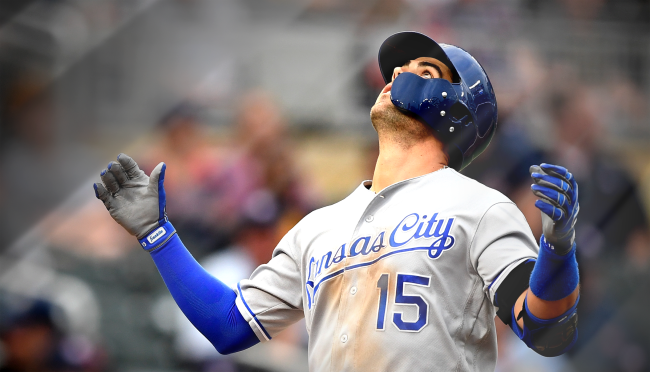 It seems like almost everyone with even a modicum of fame is on Cameo these days. It doesn’t matter if everyone knows who they are, someone will, and someone will want to pay them to make a video for them.

Kansas City Royals’ All-Star second baseman Whit Merrifield is one of those people who takes advantage of making a little extra scratch using the platform.

This week, while talking to Cody and Gold on 610 Sports Radio in Kansas City, Merrifield told an amazing story about a time when one fan paid him to break up with his girlfriend on Cameo.

It didn’t exactly go the way the fan had probably hoped.

Related: Bruce Buffer Does Some Guy’s Dirty Work With An Epic Breakup Video On Cameo

“I had some guy send me one and he had me break up with his girlfriend on Cameo,” Merrifield begins the story.

“So that was… it was kind of fun for me because I really threw the guy under the bus. So, I thought that was a pretty coward thing for him to do, so I took advantage of him paying me to make him look like, kind of a d-bag, and told her she could do way better.

“So that’s probably the weirdest one I got.”

And in case you aren’t familiar with Whit Merrifield, he led the league in hits in 2019 and 2002, is currently batting .281 with 8 homers and 61 RBI and here’s what he has in his fridge and closet, because why not?

And here he is telling another story about his recurring nightmare about being trapped in the bathroom while a game is taking place.

And another story about how unusual his MLB debut was back in 2016.